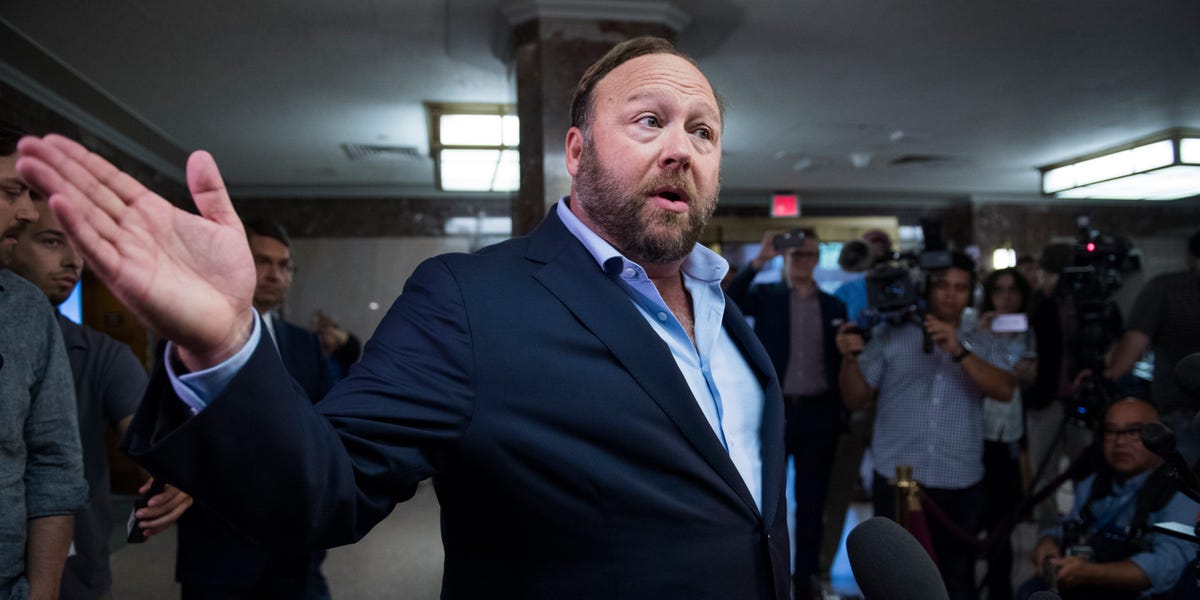 Far-right conspiracy theorist Alex Jones spoke out against the mother and father of one of the children killed in the Sandy Hook massacre on his InfoWars show Tuesday, as the father testified against him in his defamation lawsuit.

Jones appeared on InfoWars while the trial was ongoing, and Sandy Hook’s father, Neil Heslin, testified against him.

During the show, Jones referred to Neil Heslin as “slow” and someone who is “being manipulated by some very bad people.”

The Heslins’ attorney played the clip for the Texas jury as Scarlett Lewis took the witness stand.

Heslin and Lewis, the parents of murdered 6-year-old Jesse Lewis, sued Jones, the founder of InfoWars, and his media company, Free Speech Systems, for defamation over his false claims about Newtown, Connecticut in 2012. mass shooting that left 20 first graders and six teachers dead.

Wesley Ball, a lawyer for Heslin and Lewis, brought Jones’ broadcast to the court’s attention before jurors entered the courtroom after a lunch break.

“While Mr. Heslin was on the stand, Alex Jones was on his radio show making what I believe to be almost per se defamatory statements of Mr. Heslin,” Ball told Travis County District Court Judge Maya Guerra Gamble.

Ball explained that during the broadcast Jones mentioned Lewis’ name, which he said “directly addresses her claim of emotional distress.”

Jones’ defense attorney, F. Antino Reynal, said he was “told that [the broadcast] continues and [Jones] he says he’s sorry” as he argued against the clip being played for the jury.

The judge eventually allowed the clip to be played for the jury as Jones was in the courtroom.

Jones was not in the courtroom earlier Tuesday when Heslin took the witness stand and called Jones a “coward” for not being there to hear his testimony.

“I think it’s disrespectful. I think it’s a cowardly act by Alex Jones not to face me here in this courtroom,” Heslin said.

Heslin told the jury he has endured a “living hell” because of Alex Jones’ “negligence and recklessness and the propaganda he has done for his own profits and success”.

In the wake of the Sandy Hook massacre, Jones repeatedly told his audience that the shooting was a “gigantic hoax” orchestrated by the government with “crisis agents.”

He has already been found liable for defamation by a Texas court and a Connecticut court for his portrayal of the rampage — the deadliest school shooting in American history.

Jurors in the trial will determine how much Jones must pay Heslin and Lewis – who are seeking $150 million in damages.