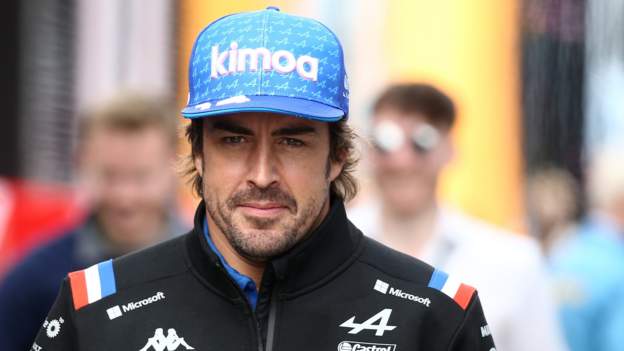 Alpine have admitted that Fernando Alonso’s decision to move to Aston Martin took them by surprise and was prompted by a contractual dispute.

Team boss Otmar Szafnauer said Alpine had offered a deal for 2023 with an option for 2024, but 41-year-old Alonso “wanted something more”.

Szafnauer said Alpine’s concerns were that Alonso’s skills might decline as he moves into his 40s.

Australian Oscar Piastri is now their number one pick for 2023.

But Szafnauer could not confirm that they would secure his services.

Szafnauer said Alonso assured him on his exit from the Hungarian Grand Prix on Sunday night that they would continue their talks in the coming days, only for Aston Martin’s news release to arrive on Monday morning.

“We offered him a one-plus-one deal,” Szafnauer said. “We talked to Fernando, ‘Look, if next year at this time you’re playing at the same level, of course we’ll take you.’

“But he wanted more certainty: ‘Regardless of the performance, I want to stay longer.’

“There comes a time when something happens naturally and you don’t have the same potential as when you were younger.

“It happened to Michael Schumacher at 42 – he wasn’t the same driver as he was at 32 or 35. It happens in cricket, which is a much less physical sport. And it happens to racing drivers too.

“So we were in favor of yes, if you play at a high level we will keep you. But let’s do it every year.”

Szafnauer said he was aware of Aston Martin’s interest in Alonso following Sebastian Vettel’s decision to retire at the end of the season – and had seen Alonso and team owner Lawrence Stroll leave the Aston Martin car together in Hungary.

“I was confident even with the discussions — there’s nothing wrong with exploring — that we were very close (to a deal),” Szafnauer said.

“I asked the question, but they said ‘no, I haven’t signed anything.’ So I was a bit surprised.”

Szafnauer said he had exchanged messages with Alonso but had not spoken to him since because he was on a boat in the Greek islands. But he was confident the relationship between driver and team would be strong enough to produce good results for the rest of the season.

“I have absolutely no worries about the rest of the season,” Szafnauer said. “Our goals are clear. We want to finish at least fourth in the constructors’ standings. Fernando realizes this too.

“I’ve texted him. I’ll call him. He’s a competitor and a professional and as soon as he puts on the helmet he wants to win. There’s nothing else on his mind in the car except to finish as high as he can.”

Szafnauer, who left Aston Martin at the end of last year before joining Alpine, said she was “confident we can beat the team Fernando will go to while he’s there”.

Szafnauer said Alpine has a first call on Piastri for next season, but was unable to confirm that a deal could be done.

He said Piastri’s manager, former F1 driver Mark Webber, was in Australia and they had not yet spoken since Alonso’s announcement.

“Oscar and his camp are ‘considering their options,’ whatever that means,” Schaffnauer said.

Asked why they couldn’t just take Piastri if they wanted him and have a contractual commitment on him, Szafnauer said: “There are some thoughts starting with a reserve driver contract with options to become a race driver contract.”

Alpine had been trying to place Piastri at Williams and secure Alonso for 2023, with a view to choosing between the two for 2024.

Szafnauer said he “understood” why Piastri would have contacted McLaren under the circumstances.

“I don’t know what pre-arrangement he has with McLaren, if any, but I’m hearing the same rumors as you,” Szafnauer said. “But I know he has contractual obligations to us and we have to him.”

Szafnauer said that if Alpine were unable to land Piastri because he was moving to McLaren to replace Daniel Ricciardo, then Ricciardo would be “a good option”.