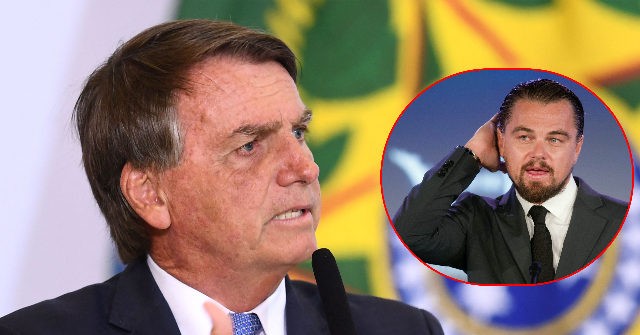 Brazilian President Jair Bolsonaro on Wednesday went on a Twitter rant against actor Leonardo DiCaprio and other celebrity environmental activists after DiCaprio’s complaints about worsening Amazon deforestation during Bolsonaro’s administration.

– You again, Leo? So you will become my best election telegram, as we say in Brazil! I could tell you, again, to leave your yacht before lecturing the world, but I know the progressives: you want to change the whole world but never yourself, so I’ll let you off the hook. https://t.co/FxCnqhFv6D

“You again, Leo? So you will be my best election telegram, as we say in Brazil!’ Bolsonaro sank, referring in his previous online feuds with the buzzed-about celebrity activist.

“I could tell you, again, to leave your yacht before lecturing the world, but I know the progressives: you want to change the whole world, but never yourself, so I’ll let you get away with it,” Bolsonaro told the DiCaprio, mocking his titanic personal carbon footprint.

“Between us, it’s strange to see a guy who pretends to love the Planet paying more attention to Brazil than to the fires that are harming Europe and his country,” Bolsonaro continued.

“One may wonder if you are obsessed with my country (or its resources) or if you simply believe that Brazil is the only one on Earth,” the Brazilian president mused.

“But don’t worry, Leo, unlike the places you pretend not to see by brilliantly playing the role of a blind man, Brazil is and will continue to be the most conservative nation. You can keep playing your Hollywood star games while we do our work,” Bolsonaro said belligerently.

“In my government, in fact, the average deforestation is much lower than in the past, when the crook-turned-candidate your Brazilian friend supports was in power,” he scoffed.

Bolsonaro went on to lecture DiCaprio about his environmental record, accusing him of using distorted images to criticize Brazil:

It’s clear that everyone who attacks Brazil and its sovereignty for the sake of virtue signaling has no idea on the matter. They don’t know, for example, that we retain more than 80% of our native vegetation or that we have the cleanest energy among the G20 countries.

It is also clear that you are not aware that my government has announced a new commitment to eliminate illegal deforestation by 2028 and not by 2030 like most countries. Or maybe you know this, but for some reason pretend to be ignorant. I wish you [are] not taking [paid] too much for this role.

If it is available to you, we would like to see you stop spreading misinformation. In the recent past, you used an image from 2003 to talk about the Amazon fires that allegedly happened in 2019 and you got exposed, but I forgave you. So go and sin no more.

Brazil has really cut it highest The G20 scores for reduced fossil fuel financing, although “green” is measured in many different ways. was judged By percentage of “clean” electricity generation, Brazil would rank third consistently behind France and Canada. Brazil is famous for its minimal use of coal power, which pushes its clean energy results above many other industrialized nations.

As Bolsonaro mentioned, the Brazilian law requires farmers to maintain up to 80 percent of native vegetation. Legal requirements vary between different regions, with particular attention to the Amazon region, which has experienced substantial deforestation both from illegal logging and the clearing of arable land.

Bolsonaro’s Vice President Hamilton Murao in October 2021 was announced a program to eliminate illegal logging by 2028 at the latest, which he described as a “more ambitious target” than the 2030 date offered by Bolsonaro at a climate summit in April 2021.

The Bolsonaro government, however, was criticized for ignoring too many reports of illegal logging and too much legal cutting.

Bolsonaro ended his rant at DiCaprio with a mocking reference to another famous climate activist, Greta Thunberg:

By the way, what do you think about the dangerous coal market in Europe? And what about Greta Timberlake, do you know what she’s been up to lately and what she has to say about it? If I hosted a barbecue at my house, I’m sure he’d yell “How dare you?”

The Brazilian president’s cry for European carbon markets referred to the European Union’s frantic efforts to coal import to meet its energy needs as Russia cuts Europe’s energy supply. Europeans import a large amount of thermal coal from Russia in addition to oil and natural gas, so they are looking for alternative suppliers during the political battle over Russia’s invasion of Ukraine.