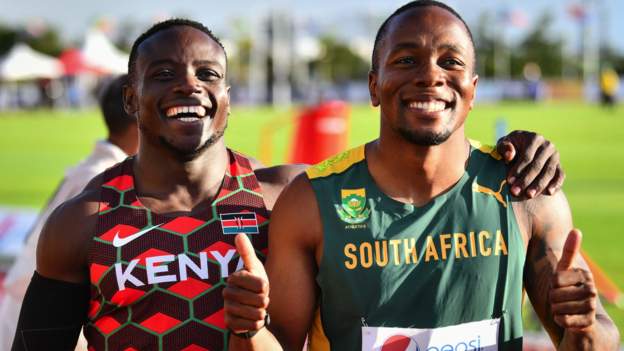 A rematch is eagerly awaited ahead of Wednesday’s Commonwealth Games final after they recorded the second and fourth fastest times in Tuesday’s races.

Simbine is the reigning champion after unstoppable pre-match favorite Yohan Blake on the cost of Australian gold four years ago.

“Johan Blake has been my biggest hero, my idol for a long time,” Omanyala told BBC Sport Africa.

“We have the same running style and almost everything about us is the same.

“Simbine showed us the way as Africans, so I have a lot of respect for him. It’s nice to have had him in front of me and we have a great relationship – he’s like a brother to me.”

Omanyala took his Commonwealth victory in 10.07s, with Sibine clocking 10.10s as he also crossed the line first in his heat.

The pair will still need to navigate their way through the semi-finals on Wednesday, with Sri Lanka’s Yupun Abeykoon fastest to qualify in 10.06 seconds.

ONE The photo-finish was needed for Omanyala to take the African title in June, but the 26-year-old insists he won’t be doing anything different in Birmingham.

“I didn’t expect the photo-finish as I’ve been winning all year [but] if you start thinking about competitors, that’s when you end up not doing your best,” he said.

“My focus is on the finish line and my own goals, not the competitors.”

Simbine believes the narrow margins in the 100m final in Mauritius took Africans’ interest in sprinting to new heights.

“When you have to break it down and make sure everything counts, everyone is excited to see who is the fastest,” the 28-year-old told BBC Sport Africa.

“Omaniala is a good guy and I have a lot of respect for him. Anyone who steps on the line is an opponent. Anyone can win, anyone can have the fight of their life.

“The Commonwealth Games have a different aspect to other competitions. This is where we really represent our countries, as well as ourselves and everything else.”