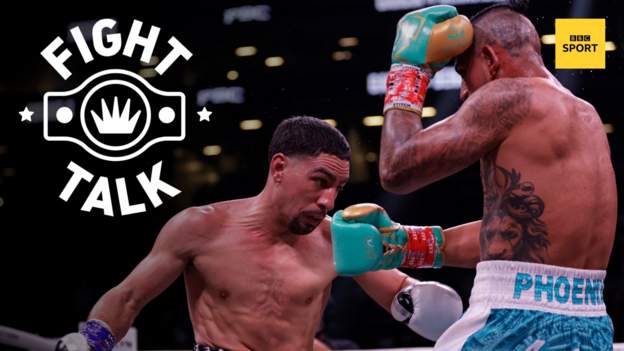 American fighter Danny Garcia used his post-fight interview on Saturday to talk about his battle with “deep depression” and anxiety.

Fans and fighters applauded his honesty.

Here are just a few talking points from the boxing world this week.

Garcia returned after 20 months to get his career back on track this weekend with a win over Jose Benavidez Jr.

The 34-year-old, from Philadelphia, is a former unified champion at 140 pounds and has also won the 147-pound version of the WBC title.

On Saturday, he followed up his win with a powerful message.

Ryan Garcia shared a message of support for his fellow citizen. He is someone who has also spoken candidly about his own mental health struggles, explaining that he pulled out of a fight against Javier Fortuna last year to look after his mental well-being.

There were similar messages of support from across Twitter.

If you or someone you know has been affected by any of the issues raised in this article, support and information is available at BBC Action Line.

Jake Paul v Hasim Rahman Jr is out. The fight was scheduled to take place at Madison Square Garden next Saturday.

However, last Sunday, it was announced by Paul’s promotional team, Most Valuable Promotions (MVP), that Rahman had pulled out due to a weight dispute.

Rahman, however, blames Paul and his team for the cancellation.

In the meantime, however, a potential replacement has emerged.

Chris Eubank Jr has submitted himself to save the event.

One man who had something to say about that was Connor Benn. A fight between him and Eubank Jr is expected to be announced soon but, as of yet, we have no confirmation.

If Saturday’s event at Madison Square Garden can’t be saved, one person who will definitely miss out is Amanda Serrano. She was set to fight Brenda Karen Carabajal on the undercard.

Amidst all the frustration, Serrano defended Paul and his promotion team after the event was canceled at such late notice.

Serrano fought one epic battle against Katie Taylor in May – and some boxing fans want to see that rematch happen sooner rather than later.