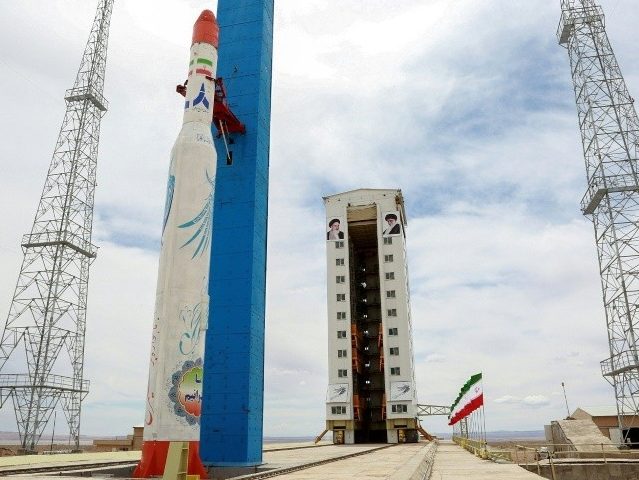 Iran’s state media has released a video clip bragging about the regime’s nuclear capabilities, claiming it can — in an instant — “turn” its nuclear program into an “atomic military,” creating a “nightmare” for Israel and the West, while warning of its “ability to turn New York into a pile of rubble from Hell.”

The video, which runs just over two minutes, begins by claiming that the Islamic Republic’s uranium enrichment in secret facilities has “struck fear and horror into the hearts of the West and the Zionist regime”.

“These facilities have brought Iran one step away from a nuclear breakthrough and from accession [the countries] that have nuclear weapons,” adds the narrator.

Iran’s IRGC-affiliated state media announces in a new video that the regime is now capable of rapidly building nuclear bombs and its ICBMs can “turn New York into rubble and hell.”

Will the US and EU finally reactivate the 6 UN Security Council resolutions?

The excerpt also claims that Tehran has “activated a cascade of advanced IR-6 centrifuges at its top-secret underground facility in Fordo,” warning that “in the blink of an eye” it could “turn Iran’s peaceful nuclear program into an atomic military program and make reality the nightmare of Israel and the West”.

He then states that, according to MI6 information, the theocratic state “has amassed sufficient material to build a nuclear bomb” and its secret facilities are so fortified that they can withstand a nuclear weapon.

Any attack by Israel or “the West” on Iran’s Natanz facility, the video warns, will trigger the secret Fordo facility to “go into combat readiness” and “carry out the work of nuclear revolution on their own, in short order.” .

The video concludes by describing Iran’s intercontinental ballistic missiles as making America “very cautious in its stances against” the Islamic regime, as they pose a serious threat to US cities.

“[I]In case of hostile action by America, it gives Iran the ability to turn New York into a pile of rubble from hell,” says the narrator.

Iran is throwing its weight around now that China Joe is in the White House. https://t.co/xiByYqfo0V

The clip was released on Saturday by Iran’s Bisimchi Media Telegram channel, which is affiliated with the Islamic Revolutionary Guard Corps, and is titled “When will Iran’s nukes wake up from their slumber?”

According to the BBC, the head of Iran’s Atomic Energy Organization, Mohammad Eslami he seemed to confirm many details in the video on Monday, saying the regime currently has the “technical capability” to build a nuclear bomb but has not yet made the political decision to do so.

The statement echoed a similar statement by senior Iranian adviser Kamal Kharazi, who last month said the Islamic Republic “has the technical means to produce a nuclear bomb, but there has been no decision by Iran to build one.”

In response to the video, Israeli-American journalist Caroline Glick claimed: “We warned that this would be the consequence of America’s refusal to deal with Iran with any seriousness.”

“We warned that this would be the end of Obama-Maiden nuclear appeasement,” he wrote.

“Progressives attacked us as warmongers. They did that.”

In June, former US Vice President Mike Pence accused the Biden administration is threatening to “roll back all the progress” the Trump administration has made in marginalizing the Iranian regime.

He also blamed the Biden team’s concessions to the “tyrants” of Tehran, the “virtual abandonment of our ally Israel” and the “disastrous withdrawal from Afghanistan” that have empowered the “adversaries of freedom” who now feel “weakened” in the American administration.

Iran, the world’s biggest state sponsor of terrorism, claims its nuclear program is for energy purposes, but world leaders, including the six nations that joined the 2015 deal to limit Iran’s nuclear weapons capability, say the Uranium enrichment can lead to Iran’s ability to rapidly build a nuclear weapon.

While the Obama-led nuclear deal — considered by many to be fatally flawed and highly one-sided, from which then-President Donald Trump withdrew in 2018 — set a 3.67 percent enrichment limit, Iran has been accused of violating the deal as Tehran produces more enriched uranium.

In March, Russia’s envoy to Iran’s nuclear talks admissible Tehran “got a lot more than it bargained for” in the latest iteration of the nuclear deal.