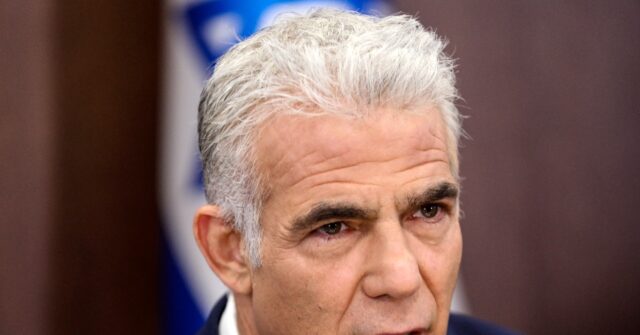 Israeli Prime Minister Yair Lapid has called on the United Nations to scrap an “outrageous” investigation into alleged Israeli crimes, saying it is fueling anti-Semitism.

In a letter to UN Secretary-General Antonio Guterres on Sunday, Lapid called on the global body’s head to follow pledge to fight anti-Semitism in all its forms.

The letter was in response to anti-Semitic comments by a member of the three-member UN panel on the Commission of Inquiry (COI), Miloon Kothari, who he said The Mondoweiss Message that social media was “heavily controlled by the Jewish lobby” and a lot of money had been invested in discrediting the UN Human Rights Council.

“We are very disappointed with social media that is largely controlled by the Jewish lobby or certain NGOs,” Kothari said. Mandoweiss on a podcast.

In a separate interview published on the anti-Israel broadcaster’s website, Kothari said Israel was “trying to undermine the mechanisms of the UN” and questioned whether it should even be a member of the global body.

The head of a United Nations inquiry into Israel has come under fire after a member of the inquiry panel allegedly said social media was controlled by the “Jewish lobby”. https://t.co/UenDxo79Xb

“I would go so far as to question why they are even members of the United Nations, because they do not respect — the Israeli government does not respect — its own obligations as a UN member state,” he added.

The head of the rabid anti-Israel COI, Navi Pillay, defended Kothari and said his comments had been taken out of context.

Lapid struck hard at the defense of Kothari and Pillai.

“The fight against anti-Semitism cannot be done with words alone. requires action. It is time to disband the Commission. From Mr. Kothari’s outrageous smears to Pillay’s defense of the indefensible, this committee does not just support anti-Semitism. it fuels it,” Lapid wrote.

He noted that the United States, France, Canada, Germany, the United Kingdom, the Netherlands, the Czech Republic and Austria, as well as the European Union had also criticized the investigation into the comments.

“Pledged to take a position “at the forefront of the fight against anti-Semitism and to ensure that the United Nations is able to take all possible action to condemn anti-Semitism and, if possible, eradicate it from the face of the earth. ‘ You emphasized that “Israel should be treated like any other state, with exactly the same rules,” Lapid wrote.

“Instead of taking a moral stand and repudiating these comments, Pillay chose to defend and justify them. He doubled down on the committee’s support for Mr. Kothari’s comments,” Lapid said. “Pillay’s claim that the comments were taken out of context is false and has even been rejected by the president of the UN Human Rights Council. I urge you to listen to Mr. Kothari’s interview and judge for yourself.”

The Palestinian Authority’s Mahmoud Abbas hailed as “heroes” two terrorists killed by Israeli troops a few days ago, telling their families in a phone call this week that the nation of “Palestine” was mourning them. https://t.co/hBAM6bZ4Bj

“In May last year, a foreign minister [Pakistan’s Shah Mahmood Qureshi] claimed that Israel controls the world’s media. Now this trope has come to the UN! The UN should accept my appeal for use [the] IHRA’s working definition of raising awareness across the UN system, in line with international human rights standards’.

Several Jewish groups have joined the chorus of condemnation.

Weekend Conference of Presidents of Major American Jewish Organizations called for the dissolution of the COI.

“Since the UN General Assembly accepted Israel as a member state, there have been many attempts to deprive it of that membership status. In light of Kothari’s recent comments, as well as previous inflammatory statements made by other committee members, Navi Pillay and Christopher Dominic Sidoti, we call on the Secretary General to end this shameful farce and help disband the harmful COI. the group wrote in a letter to Guterres.

Kothari “invoked dangerous anti-Semitic tropes … where he singled out Israel and questioned its legitimacy, while also spreading the age-old hateful canard that Jews conspire to control the media,” the group said.

B’nai B’rith International also called for the dissolution of the COI due to Kothari’s “despicable remarks” and “other egregious violations.”

“The UN is obliged to observe fairness and neutrality in its work, but is this commission fair and neutral? Obviously not,” the team said.

In an interview with Breitbart, the head of the International Legal Forum, Arsen Ostrovsky, called Pillay’s comments and defense against them a “despicable new low.”

“This is an abhorrent new low, even for the UN. Kothari’s accusations, which are filled with age-old anti-Semitic tropes, and Commission Chairman Pillay’s disgraceful defense, only underscore the gross illegality and bias of this one-sided investigation against Israel,” he said of the investigation.

Ostrovsky went on to say that the investigation “should be disbanded immediately and placed in the dustbin of UN anti-Semitic history.”

The ILF also called on Congress to pass legislation to ensure that US funding does not go to the COI and that committee members, each of whom has demonstrated “visceral bias, hostility and anti-Semitism towards Israel, are barred from in the United States, where they suggest lobbying Congress for support,” Ostrovsky told Breitbart.