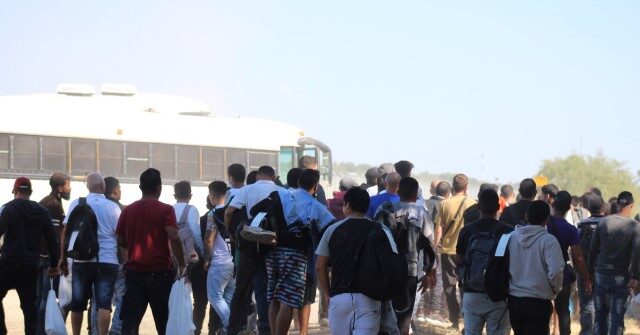 EAGLE PASS, Texas — According to a federal spokesman, 56 percent of all large groups of immigrants entering the United States from Mexico choose to do so at the Del Rio Border Patrol Sector. Large groups are defined as 100 or more people. This border town today leads the nation in large group crossings.

On Tuesday, a group of more than 250 mostly single adult men crossed the Rio Grande and surrendered to waiting Border Patrol agents. The group, mostly Venezuelan, Cuban and Nicaraguan immigrants, lined up for buses to a nearby processing plant as midday temperatures steadily rose. As reported by Breitbart Texas, the size varies, sometimes reaching as many as 500 people in a single crossing.

As part of Operation Lonestar, Highway Patrol and National Guard troops were deployed along the busiest border crossings to stem the local flow of migrants. The business started in March 2021.

Most of those in the group arrested on Tuesday will apply for asylum and be released to await the outcome of their cases in the United States. According to a CBP source who spoke on condition of anonymity, very few immigrants from the large groups are being turned away.

Eagle Pass, part of the Border Patrol’s Del Rio Sector with a local population of 29,000, currently leads all other border cities in immigration apprehensions. According to CBP, more than 45,000 immigrants were apprehended in the Del Rio sector in June. Most of this total entered near Eagle Pass. Immigration arrests increased more than 1,300 percent in June, compared to June 2020.

The volume of immigrant crossings in the small Texas border town is overwhelming the agency and has led to overcrowding at Border Patrol stations and the newly built soft-face processing facility.

Randy Clark is a 32-year veteran of the United States Border Patrol. Prior to his retirement, he served as the Director of Law Enforcement Operations, directing operations for nine Border Patrol stations in the Del Rio, Texas sector. Follow him on Twitter @RandyClarkBBTX.