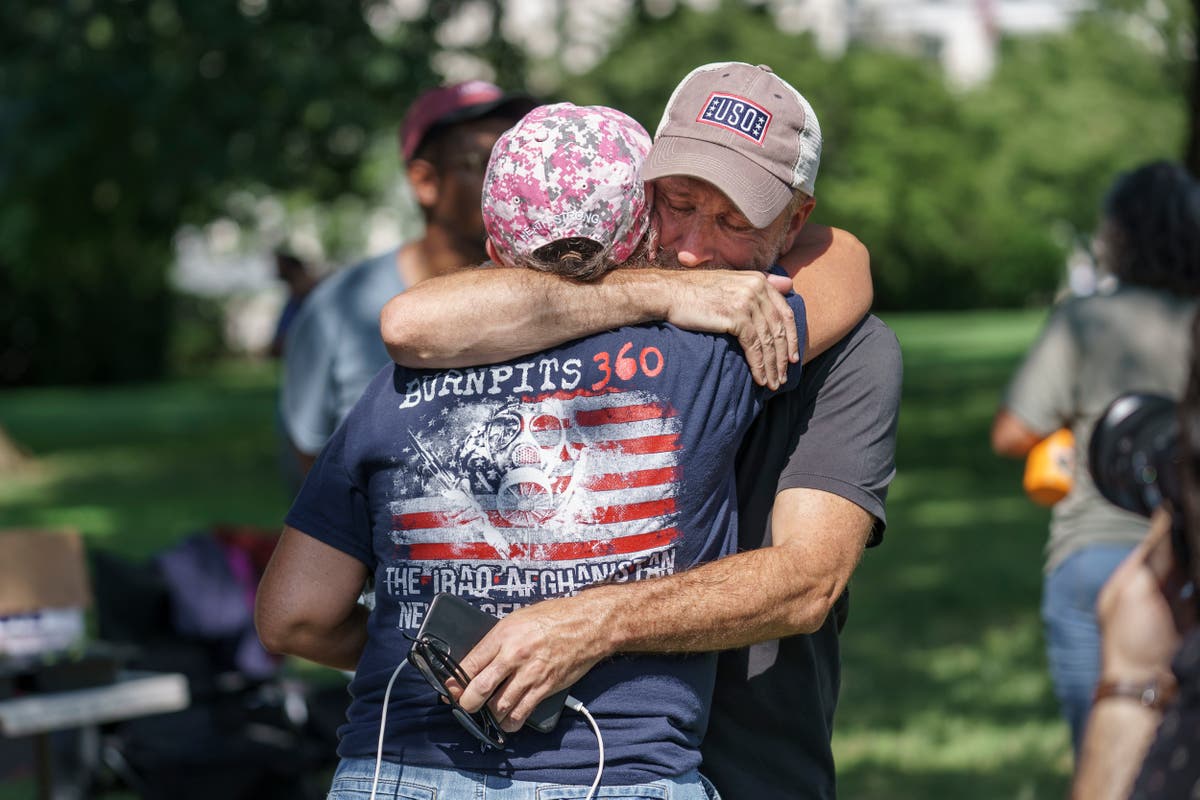 A bill boosting health care and disability benefits for millions of veterans exposed to toxic burn pits is expected to receive final approval in the Senate on Tuesday, ending a brief impasse over the measure that angered supporters and inspired some to camp out from the capitol.

President Joe Biden has pushed for the legislation, saying the measure “fulfills our sacred obligation” to care for veterans and their families.

The Senate has overwhelmingly approved the legislation once before, but it had to pass on a technical fix. But the process was derailed when Republicans made a late effort to change another aspect of the bill last week and blocked its passage. The abrupt delay angered veterans groups and advocates, including comedian Jon Stewart. It also put GOP senators in the uncomfortable position of delaying the service agencies’ top legislative priority this congressional session.

A group of veterans and their families have camped out on Capitol Hill since that vote. Senate Majority Leader Chuck Schumer, D-N.Y., said he had good news for them, announcing the final vote for Tuesday night.

“Veterans who were exposed to toxic burn fumes will be treated by the VA as they should have been from the beginning,” Schumer said.

Some Democrats questioned whether Republicans blocked the bill out of spite, following an announcement hours earlier that key Democrats had agreed on a path forward on a health, energy and tax bill that Republicans oppose and may not they can stop.

Republican senators rejected that charge and said the changes they are seeking would not affect spending for veterans in the bill.

The bill contains two key elements for veterans who served in Iraq and Afghanistan. Veterans who served near burns will get 10 years — instead of five — of enhanced health care coverage through the Department of Veterans Affairs after they separate from the military.

Second, the legislation directs the VA to assume that certain respiratory diseases and cancers are related to burn exposure, allowing veterans to receive disability payments to compensate for their injury without having to prove that the disease was a result of their service.

Approximately 70% of disability claims related to burn exposure are denied by the VA due to a lack of evidence, scientific data, and information from the Department of Defense.

Hundreds of thousands of Vietnam War-era veterans and survivors would also benefit from the legislation. The bill adds hypertension, or high blood pressure, as a presumed disease associated with exposure to Agent Orange. The Congressional Budget Office projected that about 600,000 of 1.6 million living Vietnam vets would be eligible for increased compensation, although only half would have diagnoses serious enough to warrant more compensation.

Also, veterans who served in Thailand, Cambodia, Laos, Guam, American Samoa and Johnston Atoll will be considered exposed to Agent Orange. That’s another 50,000 veterans and survivors of deceased veterans who will receive compensation for illnesses believed to have been caused by their exposure to the herbicide, CBO projected.

The bill is projected to increase federal deficits by about $277 billion over 10 years and includes no compensatory spending cuts or tax increases to pay for it.

When CBO drew up the bill, it projected that nearly $400 billion spent on VA services would be incurred as mandatory rather than discretionary spending. The Committee for a Responsible Federal Budget, a nonpartisan budget watchdog, said the reclassification to mandatory “would reduce pressure to keep these costs under control and make it easier for individuals to spend more elsewhere in the budget without trade-offs.”

Sen. Pat Toomey, R-Pa., is calling for a vote on an amendment that he said would not change the spending budgeted for veterans programs, but the way the government calculates that spending.

However, the momentum Toomey talked about was also at work in the bill when the Senate passed it in June. Senators then voted in favor of the measure in a resounding 84-14 vote, raising questions about why Republicans voted against moving the cleanup effort forward last week.

Veterans advocacy groups, a key voting bloc in the upcoming midterm elections, were outraged and increased political pressure on lawmakers to act.

At a news conference on Capitol Hill the day after last week’s procedural vote, speakers used terms like “evil” and “reprehensible” to describe Republican senators who voted against advancing the measure last week but voted for nearly the same bill in June .

“Veterans are angry and confused about the sudden change from those they thought had their backs,” said Cory Titus of the Military Officers of America group.

Sen. Kirsten Gillibrand, DN.Y., said the veterans camped out at the Capitol are exhausted and want to go home.

“But they won’t. They’re not going home until the job is done,” Gillibrand said.