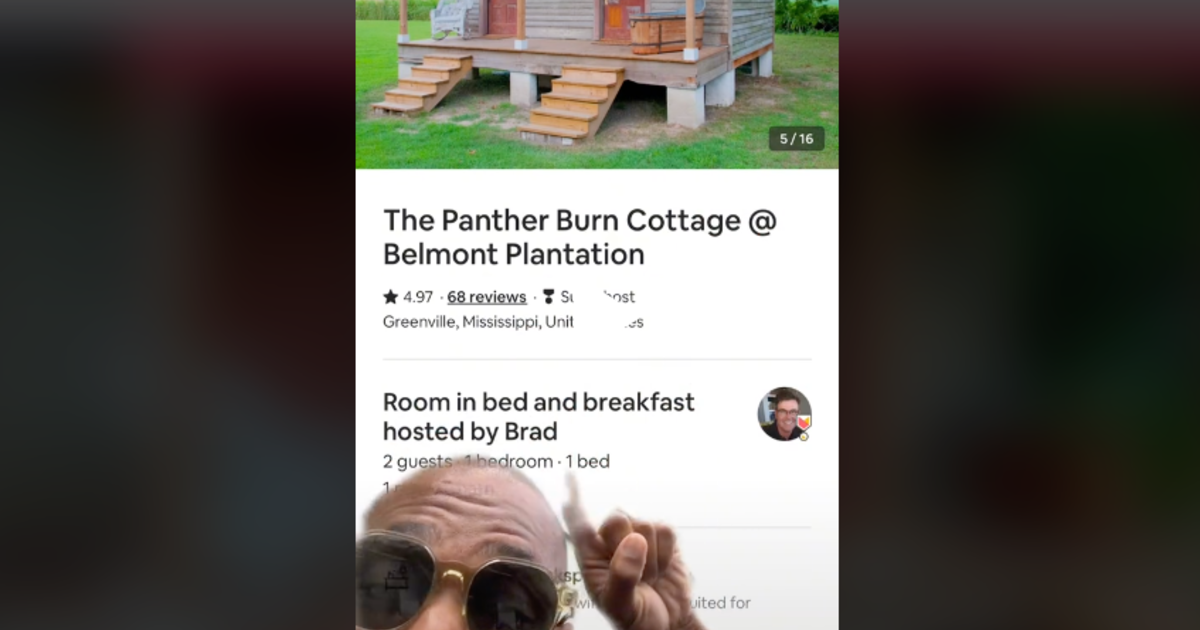 Airbnb came under fire this week after a TikTok video went viral featuring a listing the owner described as an “1830s slave house.” The company has since apologized and pledged to make changes to other “ex-slave” listings.

The TikTok, captioned “This is not OK,” shows screenshots of the rental home, listed as “The Panther Burn Cottage @ Belmont Plantation” in Greenville, Mississippi.

“This particular structure, the Panther Burn Cabin, is an 1830s slave cabin from the existing Panther Burn Plantation south of Belmont. It has also been used as a tenant cabin and as a doctor’s office for local farmers and their families to visit the plantation doctor,” says a screenshot of the listing.

According to its website, Belmont Plantation is the “last riverfront estate in the Mississippi Delta.” A saved website page shows the listing said it was the “sharecroppers cottage at the rear of the property, the most private space on the property and the only one with a TV”.

The man who posted the TikTok, Wynton Yates, continues to show photos of the cabin, saying: “How is it okay in anyone’s mind to rent this? A place where human beings were kept as slaves, rent this as a bed and BREAKFAST?”

The listing had 4.97 out of 5 stars and 68 reviews, which TikToker said was particularly noteworthy. Photos of the cottage show a clawfoot tub, tile and fixtures. The listing also describes it as having “exquisite antique furniture” and “turndown service.” He also says the cabin is the “last surviving structure” from the Panther burn plantation.

Screenshots of reviews on TikTok show people saying it was an “unforgettable” stay. Another person said they “enjoyed everything about our stay” and that it “was a perfect stop on our cross country trip”. Last March, one person said it was “a pleasant place to step into history, southern hospitality, and stay a night or two.”

“The history of slavery in this country is constantly denied and now mocked by turning it into a luxury vacation spot,” the TikToker said, showing photos of the listing showing a clawfoot tub and nice tiles and light fixtures among other amenities. .

Airbnb told CBS News that “properties that formerly housed slaves do not have a place on Airbnb.”

“We apologize for any hurt or distress created by the presence of this listing and others like it, and for not acting sooner to address this issue.”

The company said it has removed the listing and is removing other listings in the US known to include former slaves. The company also said it is “working with experts” to create new policies that address properties that might otherwise be related to easements.

It was unclear how long the Airbnb listing had been live. Tiktok is showing reviews dating back to August 2021.

“I apologize for the decision to accommodate our guests in the ‘Slave Quarter’ behind the 1857 house that is now a bed and breakfast. I also apologize for offending African Americans whose ancestors were slaves,” he wrote. Hauser.

He went on to say that he was “vehemently opposed” to the previous owner marketing the building as a place where slaves lived and that the building “was never part of a plantation.”

“I’m not interested in making money out of slavery,” he said. “The plan is and was to no longer advertise the slave quarters…I will provide visitors with a historically accurate depiction of life when Belmont was built and inhabited by the owners of the family homestead as well as About 80 slaves they bought that they had no control over their lives.”

According to Hauser, the building’s original owner told previous owner Josh Kane, who listed the property on Airbnb, that it was not used as a slave facility and was not old enough to house slaves. The building was probably used as a dispensary. State property records show Joshua B. Cain was previously listed as the property owner.

“He also asked Cain to stop advertising it as a slave when the building was acquired, he said. “Cain refused.”

He also said he would find experts to provide more information about the property and hoped to “right a terrible wrong”.