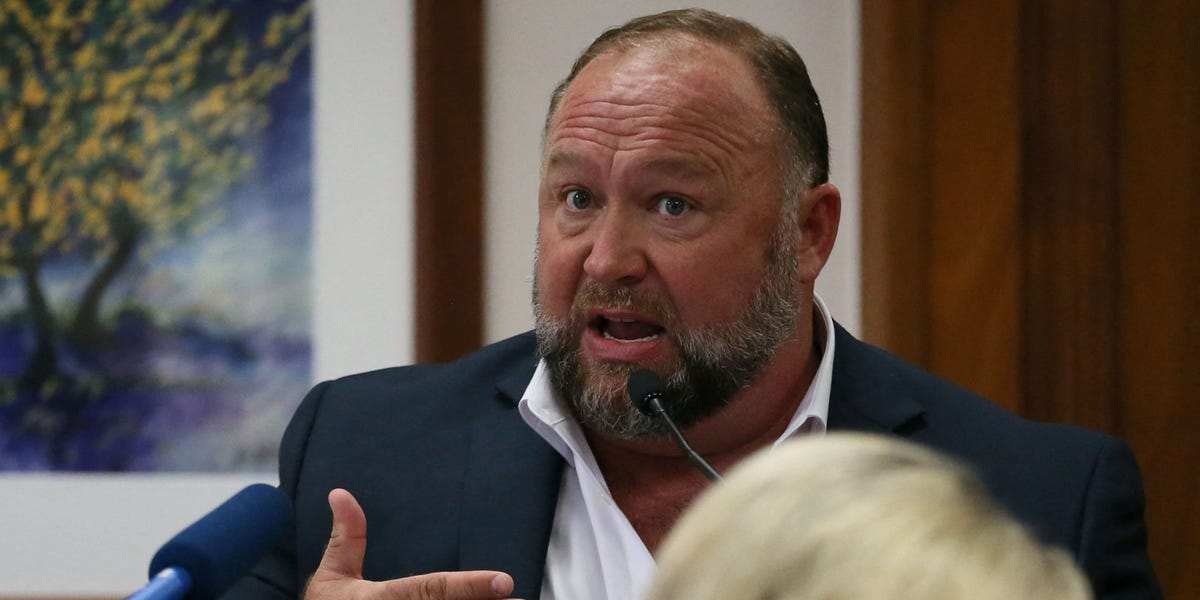 Alex Jones’ defense attorney “messed up” and sent a digital copy of the far-right conspiracy theorist’s cellphone to the lawyer for Sandy Hook parents who are suing him for defamation, the parents’ lawyer said in court Wednesday.

Jones’ phone transcript revealed a text about the 2012 Newtown, Connecticut massacre that Jones claimed did not exist, as well as financial information about Jones’ InfoWars that Jones did not turn over when testifying in that case.

Attorney Mark Bankston – who represents Neil Heslin and Scarlett Lewis, parents of a boy killed in the Sandy Hook Elementary School shooting – announced in a Texas courtroom that Jones’ attorney had sent him a “full digital copy” of Jones’s cell phone. “with every text message you’ve sent in the last two years” twelve days ago.

Bankston said that when he “informed” Jones’ lawyer of what he was doing, he “didn’t take any steps to make it privileged or protected in any way.”

“That’s how I know you lied to me when you said you didn’t have text messages about Sandy Hook,” Bankston told Jones as Jones took the witness stand and testified in his own defense at his defamation trial.

Bankston accused Jones of lying during his deposition when he claimed he had no Sandy Hook messages on his phone.

“Do you know what perjury is right? I just want to make sure you know before we go any further,” Bankston asked Jones.

Jones testified that he did not see the text messages that mentioned Sandy Hook and that he gave everything he could find to his attorney.

“I’m not a tech guy,” Jones said from the witness stand as he claimed he “didn’t lie.”

Bankston also asked Jones about messages that showed InfoWars was making up to $800,000 a day in 2018, financial information that was not provided in the deposition.

Discussing the disclosure with jurors, the judge overseeing the case said: “What the lawyer is saying is not evidence, so we don’t know if it was accidental or on purpose because we don’t have evidence of that.

“But what we do know is that it was not properly turned over when it should have been,” Travis County Circuit Court Judge Maya Guerra Gamble told the court.

After testimony and the court adjourned, Jones left the courtroom with his attorney, who later returned to court by phone and spoke with Bankston to confirm it was a digital copy of Jones’ phone.

Meanwhile, Bankston thought aloud, saying, “There will be months after this.”

“You know what no one has thought of yet?” asked. “What happens when that phone goes to law enforcement?”

Heslin and Lewis, the parents of 6-year-old Jesse Lewis, sued Jones, the founder of InfoWars, and the media company Free Speech Systems, for defamation over his lies about the 2012 mass shooting that left 20 first graders and six teachers. dead.

The parents, who testified at trial, said they endured years of harassment and death threats from Jones who repeatedly told his audience that the shooting was a “giant hoax” staged by the government with “crisis agents.”

Jones testified Wednesday that he believes the mass shooting was “100 percent real.”

He has already been found liable for defamation by a Texas court and a Connecticut court for his portrayal of the rampage — the deadliest school shooting in American history.

A jury in the trial will determine how much Jones must pay Heslin and Lewis, who are seeking $150 million in damages.

Jones testified Wednesday that InfoWars’ revenue for the most recent fiscal year was $70 million and that the site employs about 80 workers and contractors.

“Any damages over $2 million will sink us and shut us down,” Jones told the jury.