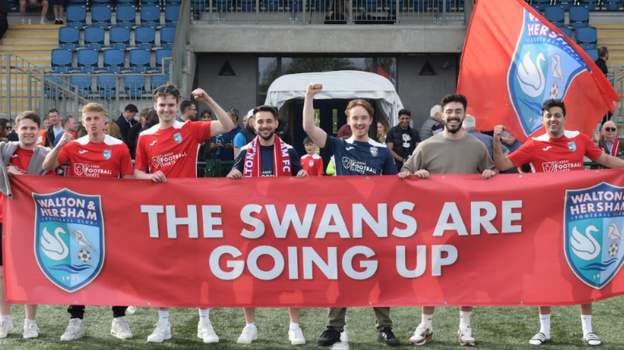 The average league gate last season was 296 – yet they have more followers on TikTok than six Premier League clubs and their owners are younger than most of their signings.

School friends Jack Newton, Calogero Scannella, Sartej Tucker, Thomas Bradbury, Ben Madelin, Stephan Karidi and Reme Edetanlen were all 19 when they took out their student loans together to buy non-league Surrey in 2019.

Three years and two promotions later, the Swans are cashing in on a fast-growing social media presence which has resulted in shirt sales “in places you’ve never heard of”.

As Walton & Hersham prepare to kick off the 2022-23 season at home to Kennington in the FA Cup extra qualifying round on Saturday, the young co-owners tell BBC Sport of their plans to shake up the non-league scene.

“At first, we all thought buying a club was an absolutely crazy idea,” says Tucker, Walton & Hersham’s business and media director. “How could anyone think that would work?”

Swans chairman Newton adds: “It’s a lot easier to run a club with your mates because you know you can finally say what’s on your mind, which you wouldn’t be able to do in a professional capacity.”

“We included GCSE grades in the takeover offer”

Having earned promotion to the eighth tier of English football after amassing 91 points from 38 games last season, Walton & Hersham cannot be accused of being a pub club.

However, in 2019, The Mill pub in Kingston upon Thames became the regular meeting place for the seven to discuss the purchase of the 77-year-old club.

Walton & Hersham defeated a Brighton side managed by Brian Clough in the 1973-74 FA Cup, once having Ballon d’Or winner Sir Stanley Matthews as chairman, while striker Nathan Ellington played for them before turning out for West Brom in the Premier . Link.

By 2019, the Swans were set to be relegated to the 10th division and long-term owner Alan Smith wanted to sell.

“The whole idea came from Calogero,” says Newton. “He went to games and talked to the owner. He had an idea that they were trying to move on.”

The seven drew up a document to present to Smith, outlining their plans for the club.

“We even put down the GCSE grades we each got,” adds Newton.

“We barely had any money for it. We were 19-year-old students who took out student loans together to finance the whole thing. So there were seven of us. It was like a couple of thousand pounds each.”

It’s not just on the pitch that the Swans have seen success since the ‘Class of 2018’ – the year they all left school – walked through the gates at Elmbridge Sports Hub, where the club plays.

The young owners have used their social media skills to create an impressive online environment that many Premier League clubs would be proud of.

A 32 second clip posted towards the end of last season it has been viewed 3.5 million times.

“We’ve been releasing short match day footage throughout last season – a one-minute watch of the highlights of each match,” says Tucker.

“This has enabled people from all over the world to contribute to our story.”

The partnership resulted in the Swans selling replica kits in more than 30 countries on six continents, including the Atlantic Island St. Pierre and Miqueloninhabited by just 6,000 people.

“For a non-league club to be able to sell clothing on every continent on the planet is crazy,” adds Tucker.

“People are really interested in our story and what we’re trying to do. At our current rate, we should have a million TikTok followers by the end of October.”

He shows up in boardrooms in replica shirts

The past three years haven’t all been smooth sailing, but the young co-owners are learning as they go.

“Once we took over, we made changes to the club’s badge, but we didn’t really consult the fans about it,” says Tucker. “They are proud of the traditions of the club.

“Early on, we needed to communicate with them, and since then we’ve gained that experience and put it to good use.”

The arrival of the young co-owners was the talk of the boardrooms in the Combined Counties League, where Walton & Hersham enjoyed continued promotion. They start 2022-23 in the Isthmian League South Central Division.

“We were at a neutral ground for the League Cup final in May and the dress code was suit and tie, but it must have been 25C,” says Newton.

“We used to show up in replica shirts and shorts. We were not offered any free drinks. In the opposition meeting rooms or whenever a group comes to us, they are very surprised by how young we are.

“But there’s been an influx of younger people running clubs and we’re having conversations with them because you can learn a lot from those guys.”

At 41, Swans boss Scott Harris is almost twice as old as the co-owners.

“I felt pretty confident we would work well together when I accepted the job,” says Harris, a former Walton & Hersham player.

“It’s all very professional and all the co-owners have their heads down. They’ve brought energy and ideas to the club.”

Season tickets for adults cost £129 – under-12s can attend for free – at Walton & Hersham, who are targeting a place in the National League South over the next five years.

“We’re not throwing money around like some people are at non-leagues. We’ve tried to make it as sustainable and entrepreneurial as possible,” Newton says.

“As far as getting bored, a few years down the road we might want to move on to other things.

“But the club will be in a very strong position if and when that time comes. Our plan is to leave something positive for the community.”