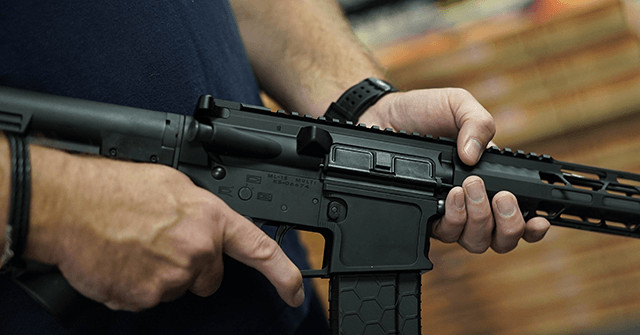 Reps. Seth Moulton (D-MA) and Veronica Escobar (D-TX) are promoting the Mass Shooter Prosecution Act, which would open up mass shooters and their “support networks” to terrorism charges if the shooters use guns Democrats usually label “assault weapons.”

Yahoo News is listed Moulton addressing the mass shooters, saying, “They are terrorists and they should be prosecuted as terrorists.”

He added, “[The bill] it also allows prosecutors to go after networks of material support. Networks that provide help, perhaps their guidance, instruction maps. Anything that helps these attackers carry out these savage attacks.”

Escobar said, “My community in El Paso has been forever changed by the actions of a domestic terrorist fueled by theories of white supremacy. With this legislation, we are giving law enforcement the tools they need to pursue investigations into terrorist networks and anyone responsible for attacks against our communities.”

The text of the Mass Shooter Prosecution Act defines a mass shooter as “anyone who kills 3 or more persons in one incident using a machine gun or concealed semiautomatic weapon in a circumstance described in subsection (b).”

The semi-automatic weapons that qualify under the “mass shooting” heading are the same types of weapons that House Democrats voted to ban last week. Firearms apart from these apparently do not fall within the parameters of the proposed terrorism charges.

The punishment for those meet up the definition of “mass shooter” is imprisonment for “any term of years or life. “