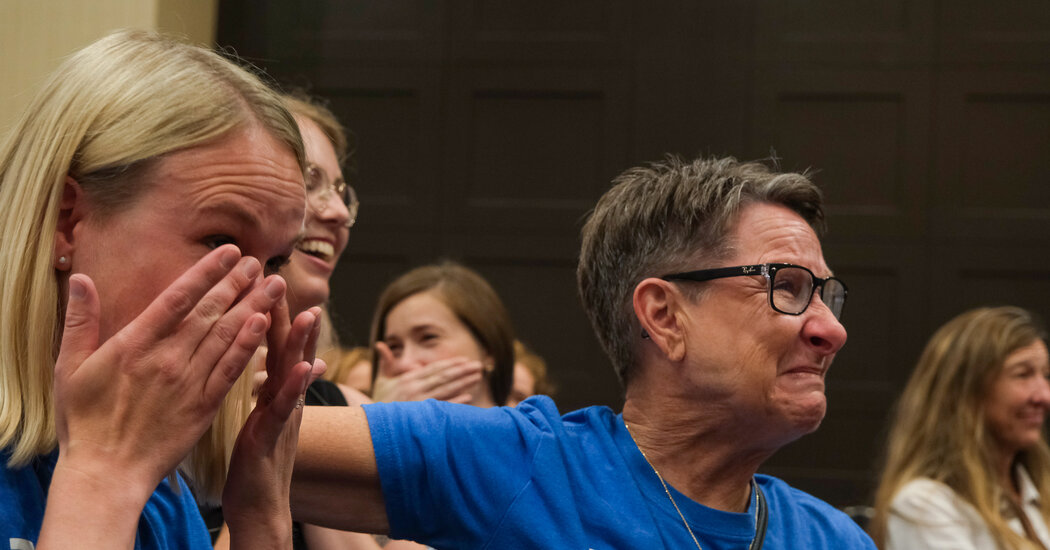 Abortion rights advocates won a huge and stunning victory Tuesday in one of the nation’s most conservative states, with Kansas voters flatly rejecting a constitutional amendment that would have allowed state lawmakers to ban or greatly restrict abortions. .

Results were still coming in as the night wore on, but with more than 90 percent of the ballots counted, the pro-abortion side was ahead by about 18 percentage points, a stunning margin in a state that voted for President Donald J. Trump in 2020 by a margin of just under 15 percentage points.

Here’s a look at what happened.

Going into Election Day, many observers believed the outcome of the referendum would be determined in increasingly Democratic areas like the Kansas City suburbs — that is, by whether enough voters turned out there to offset the heavily conservative leanings of the rest of the state. But abortion opponents fared surprisingly poorly even in the reddest spots.

Consider far western Kansas, a rural area along the Colorado border that overwhelmingly votes Republican. In Hamilton County, which voted 81 percent for Mr. Trump in 2020, less than 56 percent chose the anti-abortion position Tuesday (with about 90 percent of votes counted there). In Greeley County, which voted more than 85 percent for Mr. Trump, only about 60 percent chose the anti-abortion position.

We can talk about cities all day, but Kansas is known as a rural GOP state for a reason: rural GOP areas cover enough of the state that they can, and almost always do, outvote the cities. The rejection of the amendment has as much to do with tepid support in the reddest counties as it does with strong opposition in the bluest.

Yes, the swing areas swung to the left.

Certainly, though, cities and suburbs deserve some credit. The relatively narrow margins of victory for abortion opponents in western Kansas left the door wide open, but abortion rights advocates still had to get through it, and they did.

What was striking, in fact, was the extent to which the picture was everywhere similar. From the bluest counties to the reddest, abortion rights did better than Mr. Biden and anti-abortion did worse than Mr. Trump.

We won’t know exactly how many people voted, much less their party breakdown or demographic characteristics, until the results are fully tallied. But we can already tell that statewide turnout was much higher than expected — almost as high as it was in the last midterm election.

About 940,000 Kansans voted in the referendum, according to preliminary New York Times estimates, compared with about 1.05 million people in the November 2018 midterm elections. The gap between turnout in primary elections and general elections is typically much wider. from this.

Before Tuesday, the Kansas secretary of state’s office projected a turnout of about 36 percent. But as voting ended, Secretary of State Scott Schwab told reporters that anecdotal evidence suggested turnout could be as high as 50 percent, a surprising increase over what was expected. The Times estimate of 940,000 would mean a 49 percent turnout.

The voters expected to turn out on Tuesday would, under normal circumstances, be mostly Republicans. That’s not only because registered Republicans greatly outnumber registered Democrats in Kansas, but also because most of the contested races on the ballot were Republican primaries, giving Democrats little reason to vote — other than to oppose the constitutional amendment.

The Supreme Court confounded the calculations of abortion opponents.

Abortion opponents’ strategic decisions around the amendment began with the choice to put it on Tuesday’s ballot in the first place. The primary electorate was expected to be small and disproportionately Republican, and it seemed a reasonable assumption that the amendment would have a better chance of passing in that environment than on a general election ballot.

The overturning of Roe v. Wade in June upended that strategy, turning what would otherwise have been an under-the-radar ballot measure into a nationally scrutinizing referendum on abortion rights. Many voters might previously have seen the stake as theoretical: If the US Constitution protected abortion rights, how much did it really matter if the Kansas Constitution did? But then the Supreme Court reversed the first part of that equation, and Kansas abruptly became an island of abortion access in a sea of ​​Southern and Plains states, banning the procedure.

Groups on both sides blanketed the state with millions of dollars in advertising. Democrats who would otherwise have stayed home, knowing their party had few competitive primaries on the ballot, left specifically to vote against the amendment. Abortion rights advocates were seized by that great political motivator: anger.

On Tuesday the results were clear.