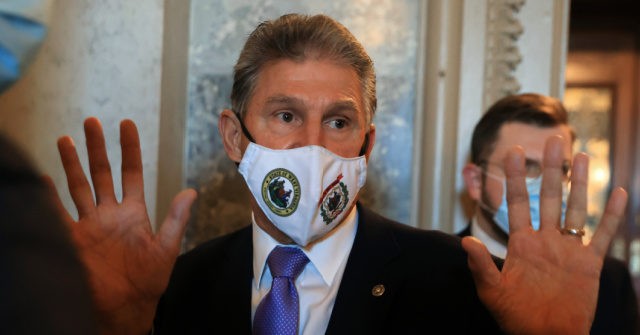 On CNBC’s “Closing Bell” Tuesday, Sen. Joe Manchin (D-WV) responded to a question about who should be blamed for inflation by saying, “It’s not my job here to blame people. You want to blame people, you will never achieve anything. I’m here to get things done.”

Host Sara Eisen asked: “You’ve been critical, Senator Manchin, of the Federal Reserve in the past because you’ve been late and late when it comes to fighting inflation. Do you think they are doing a good job now?’

Manchin acknowledged his earlier criticism of the Fed, adding: “Well, they’re coming now. Now they are doing their job. It took them a while to kick them. But they do their job. Let’s just see what happens. But we can do a lot more, basically, producing, removing energy chains, letting our oil companies do what they do, let our gas companies — let’s build some pipelines, let’s do some things here. “

After Manchin declared that inflation is harmful, Eisen asked, “Who owns this, whose fault is it? The Fed? The Biden administration? Congress? You went over $2 trillion every time [when] Was America opening up again?’

Manchin responded: “Sarah, that’s not my job here to blame people. You want to blame people, you will never achieve anything. I’m here to get things done. My Republican friends are upset right now, for whatever reason, I don’t know. They are still my friends, they will always be my friends, and we work very well together. We did three things they told me to do. They always said, can’t we produce more? Absolutely. Can’t pay the debt? Absolutely. Can we simplify the licensing process? Absolutely. In a normal time when it wasn’t so toxic because people hate so much, I love them all. … This is an American bill. Let the American people win. For once, let them win.”

In April 2022, Manchin reacted to the inflation numbers released that month stating that “The Federal Reserve and the [a]The government has failed to act quickly enough and today’s data is a snapshot in time of the consequences being felt across the country.”