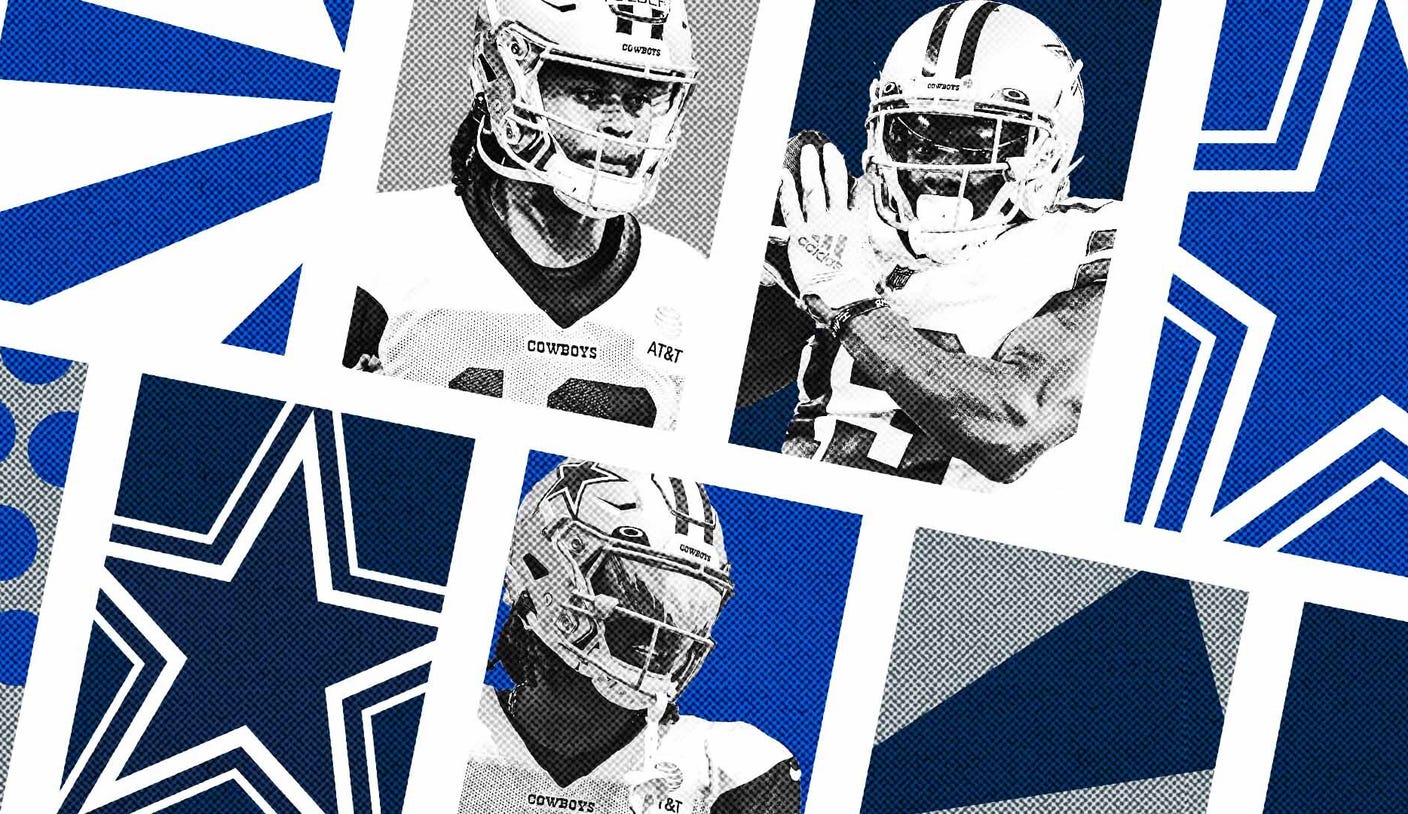 OXNARD, CA — It doesn’t sound like those phone calls are coming anytime soon.

To hear it from the rest of us, the Dallas Cowboys should have spent the last 24 hours looking for someone — anyone — to add to their depleted receiver depth chart. But in assessing the situation after losing James Washington to a broken leg, they don’t seem to agree.

“I’m pretty happy with where we’re going to be and there’s no urgency to look for a veteran receiver,” Cowboys owner and general manager Jerry Jones said Tuesday afternoon.

James Washington out 6-10 weeks. Cowboys based on CeeDee Lamb

Dallas will be without rookie wide receiver James Washington after suffering a broken leg in practice.

As has been the case for much of this year, this is a front office that has far more confidence in its current roster than most. Losing Washington for 6-10 weeks, combined with Michael Gallup’s continued recovery, leaves them without much experience. As noted yesterday, CeeDee Lamb and Noah Brown are the only healthy receivers on the team with significant NFL regular season experience.

Regardless, Jones said the Cowboys have long felt good about the young players on the depth chart. Jaylen Tolbert is a no brainer as the front office drafted him 88th overall in this year’s draft. But even unheralded players like free agents Dennis Houston and TJ Vasher continue to come up in discussions.

“We were expecting a little bit of a numbers problem with keeping the receivers or not keeping all the ones we wanted,” Jones said. “This might just be a night out. But it doesn’t create urgency for the receiver. We like these young guys.”

This may sound familiar to anyone who has followed the Cowboys for a while. Just four years ago the front office entered the regular season leaning on the likes of Allen Hurns and Deonte Thompson, as well as a rookie Gallup, to elevate their game.

Asked about that Tuesday, Jones pointed out that there is other talent on the roster. The Cowboys do have a top receiver in Lamb, and Dalton Schultz is still hanging around. It is still undeniable that someone will be called upon to rise to the occasion.

“They certainly have no choice,” Lamb said. “The door is open for anyone’s opportunity, and I feel like the younger guys are taking that opportunity and trying to do something with it.”

It’s a long list to watch in the coming weeks. Simi Fehoko is obvious, as he was only drafted last year. There’s also newly signed KaVontae Turpin, who was named USFL MVP over the summer. Wasser signed with the club last spring but missed all of 2021 with a non-football injury. Brandon Smith spent last season on the practice squad.

Then, in addition to Tolbert, there’s the quartet of undrafted rookies: Dennis Houston, Jaquarii Roberson, Ty Fryfogle and Dontario Drummond.

Sorry if none of these names sound familiar. But from the sounds of it, they’ll be given a chance to change that. With so few vets to choose from, Cowboys coach Mike McCarthy said first-team reps will be based on merit. And with starters unlikely to play a ton during the preseason, there will be plenty of in-game repetitions in August.

There is a long way to go, but there is still much to see.

“I want to see what they can do in the heat of battle, and then we got Tampa in September,” Lamb said. “There’s only one way to find out.”

The Cowboys went through their second full practice of training camp on Tuesday. Here are some additional notes from the field of practice.

Is it too early to panic with the kicker contest? Because after a few days, things aren’t exactly encouraging.

Rookie Jonathan Garibay and CFL veteran Lirim Hajrullahu are the Cowboys’ tight ends in training camp, and neither is in what you’d call a running back. It was Garibay who competed on Monday and on Tuesday it was Hajrullahu’s turn.

Garibay hit six of eight attempts in the duo’s special teams practice session, while Hajrullahu finished a very good 3-for-8.

Later in practice, McCarthy called one of the impromptu “Mojo Moments,” intended to test the team’s response to rapid-change situations. Each kicker had three field goal attempts in front of the entire team.

Hijrallahu went 1-for-3, with a strikeout in his first attempt. Garibay missed none of his three attempts.

To be fair to them, most of those kicks were from long range – 50 yards or more. There was also a steady breeze blowing across the practice courts.

“That wasn’t confidence building as he faced a 50mph wind that was testing them from 60 yards out,” Jones said.

Much like the situation with his receivers, Jones said he’s not worried about the kickers just yet. Although it sounds like he’d rather see them try shorter kicks.

Only Micah Parsons could produce a practical note on warm-ups, but here we are.

Parsons was a hell of a high school running back, as he has pointed out in the past, and he looked it Tuesday. Cowboys linebackers work through a tackling drill every day, where they adjust the size of a ball carrier and get the proper angle with the ball.

Technically, it was newcomer Christian Sam working the drill, but he was working against Parsons, who didn’t take the drill lightly, throwing the tackler to the ground.

The Cowboys aren’t likely to let Parsons carry the rock in a game scenario. But it would probably be fun.

Unsurprisingly, indoor line enthusiasts have an easier time shining with the pads.

Now that some real contact and hits are happening, it’s fun to watch what happens at the defensive tackle position. Unsurprisingly, the likes of Neville Gallimore and Osa Odighizuwa feature. Gallimore caught a pass Tuesday during a two-minute drill, and Odighizuwa’s ability as a pass rusher was on regular display.

A name worth mentioning at the outset is Trysten Hill. The fourth-year veteran is overlooked by fans and the media, but has done his share in two days. On Tuesday, he made a big hit on Ezekiel Elliott in the A-gap, blocking a run at the line of scrimmage. A few snaps later, he had a chance for a sack when he beat his man and forced Prescott out of the pocket.

“Obviously, it looks like he’s back from the injury,” McCarthy said. “I thought during the offseason he had some ups and downs with the knee. But so far, so good. Looks good to me.”

It’s also worth mentioning that rookie John Ridgway has gotten some time with the defensive starters. Although, given Dan Quinn’s tendency to switch personnel frequently, it’s hard to know how much to read into it.

Sprinkle sat out after feeling a flare in his Achilles, while Ferguson left early with a hamstring problem. Cox blew up his knee and the Cowboys chose to be careful not to practice him. The expectation is that the second-year linebacker will practice on Thursday.

David Helman covers the Dallas Cowboys for FOX Sports, providing daily insight and analysis on the NFL’s most visible franchise. Prior to joining FOX, David spent nine seasons covering the Cowboys for the team’s official website, DallasCowboys.com. In 2018, he won a regional Emmy for his role in the production of “Dak Prescott: A Family Reunion” about the quarterback’s time at Mississippi State.

Get more from the Dallas Cowboys Follow your favorites to get information on games, news and more.