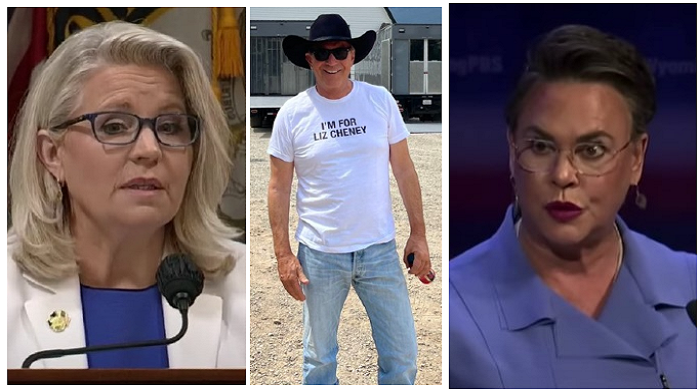 Cheney, who is staring at a double-digit deficit heading into the Aug. 16 primary for the Wyoming seat, tweeted a photo of himself Yellowstone actress wearing an “I’m For Liz Cheney” t-shirt.

“Real men put country before party,” he captioned the image.

Conservatives on social media had a field day on Twitter with the tweet with many noting that Costner, who lives in Colorado, can be “for Liz Cheney” all he wants, but he can’t vote for her.

Liz couldn’t find a single Wyoming voter to support her,

so — of course — she had to settle for an actor who lives in Colorado.

RELATED: ‘Hell No’: Watch Wyoming voters tell CNN if they plan to vote for Liz Cheney

Harriet Hageman has joined the chorus of conservatives mocking Liz Cheney to tout her endorsement of Hollywood actor Kevin Costner.

“Yellowstone is a good show, but Kevin Costner is a fake rancher in a Hollywood production that was shot mostly in Montana, not Wyoming,” Hageman said in comments to Daily Mail.

“And I’ll bet if he had to work on a real ranch for a day, he’d call his agent to get him out of there,” she added.

Hageman notes that the support for Liz Cheney is not surprising, given that she has supported Democrats in the past.

“I’ll take the support of the people of Wyoming any day of the week over a liberal actor who voted for Joe Biden,” he noted.

I can’t wait until the 16th when Liz Cheney steps in behind Hageman and Monkey Pox.

“Hell no” They don’t want Liz

Harriet Hageman certainly appears to have the support of the people of Wyoming heading into her primary with Liz Cheney, even with Hollywood endorsements and Democratic support for her opponent Liz Cheney.

A recent poll shows Cheney trailing by a nearly insurmountable 22 points with less than two weeks to go before primary day.

A segment that aired on CNN in which the network spoke to real Wyoming voters as opposed to a “pretend rancher” from Colorado led to some great entertainment recently.

When asked if they supported Liz, responses included “Hell no,” “she made us dirty,” and calling the Republican’s anti-Trump work on the Democratic-led select committee investigating Jan. 6 “disgusting.”

While Kevin Costner’s support may not be big in her Wyoming primary against Hageman, Cheney can use it for other political aspirations once she retires from Congress.

Cheney recently told CNN that she has not decided whether she will run for the White House in 2024 as a means of “trying to stop” former President Donald Trump.

Rep. Liz Cheney on whether she could run for president in 2024:

“I’ll make a decision on 2024 down the road… Like I said, I think our nation is on the edge of an abyss… We need to elect serious candidates.” pic.twitter.com/uq29j2V0Gf