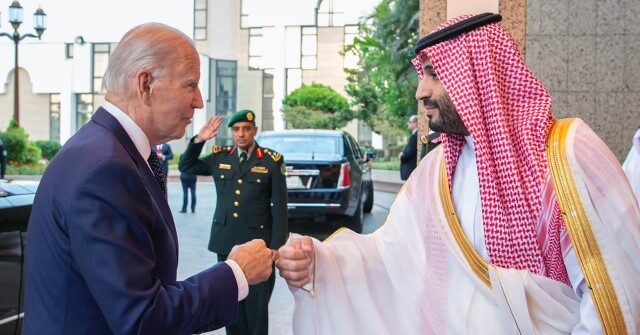 Calls by the Biden administration for a significant increase in oil production were rejected by OPEC and its allies on Wednesday. The cartel agreed to a small output increase that is not expected to have more than a minimal impact on crude prices.

The Organization of the Petroleum Exporting Countries and allied oil producers such as Russia agreed to increase their collective output by 100,000 barrels per day in September. According to Reuters, this equates to 86 seconds of global demand.

The small increase is described as “an insult to US President Joe Biden”. according to Reuters. Biden traveled to Saudi Arabia last month to persuade the kingdom’s leaders to pump more oil, a dramatic and embarrassing reversal after Biden promised on the campaign trail to “end fossil fuels” and treat the Saudis as pariahs after assassination of Jamal Khashoggi.

During a Democratic primary debate in November 2019, Biden they boasted he was going to “in effect, make them pay the price and make them actually the pariahs that they are.” He added that there is “very little social redemption value in the current government in Saudi Arabia.”

After Biden’s trip, the US government approved sales of missile defense systems to Riyadh.

OPEC+, as the broader group is known, cut production dramatically after oil demand collapsed in 2020. As demand recovered, the group agreed to increase output shared among its members based on how much they cut output in 2020 .Until last month, the group was implementing monthly increases of 432,000 barrels per day. Many members, however, have struggled to produce as much oil as they are allowed under the deal, leaving global markets short of oil.

In June, the group agreed to increase production by 648,000 barrels per day in July and August. The extra 100,000 will come into effect in September.

The alliance noted that spare capacity is “severely limited”. In April, Breitbart News reported that a study by economists at the Federal Reserve Bank of Dallas had concluded that OPEC could not close the gap between its official quota and actual production because capacity was tighter than widely believed. understandable.

Oil prices moved higher after the announcement, highlighting the insignificant increase in the production quota.