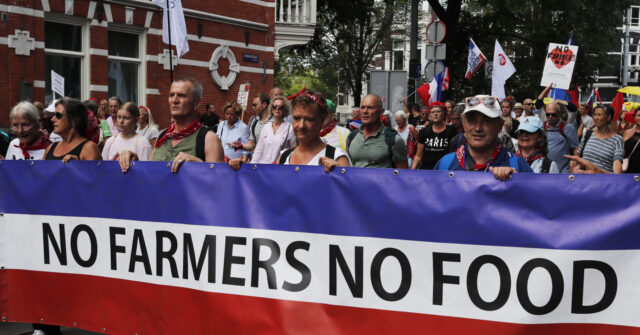 Police in the Netherlands were filmed violently beating a protest by a Dutch farmers’ group to remove an anti-government mural in the city of Almelo on Monday afternoon.

After Mayor Arjen Gerritsen ordered the removal of a mural of the upside-down Dutch flag, which has become a symbol of the farmers’ protest movement as it is seen locally as a sign of discontent with the government, a group of protesters came to defend the mural, which was painted on a wall near the town hall of Almelo, local TV network RTV Oost mentionted.

The mural also featured the words “no farmers, no food”, referring to the EU-led green agenda that globalist Prime Minister Mark Rutte is trying to impose. Under the plan, nitrogen emissions should be cut by 70 percent by 2030, putting at least 30 percent of farms in the country at risk of closure.

According to footage posted on social media that was shot at the same time as other footage shared by Dutch newspaper De Twentsche Courant Tubantia, the peaceful protest turned violent after a police officer shoved an activist and then started waving his baton, angering the other protesters. The rest of the police force was then seen beating the enraged crowd with their batons.

Undaunted, the farmers refused to back down, eventually forcing the police into an apparent retreat.

A total of four people were arrested during the protest, according to the mayor, who warned of further action.

“The police have registered license plates and will continue to take action against people so that they have a queue under the criminal law,” Gerritsen said. “There were serious disturbances, people committed violence against the police. I don’t tolerate it and then I act, along with an excellent team of police officers.

After the protest, the municipality removed the inverted flag mural, replacing it with a blue and yellow painting that read: “Water City.”

Protests against the EU-based climate agenda, which many see as an attempt by the government to grab land held by generations of farmers, have shown no sign of slowing down in their third month of action this year.

Indeed, the methods have only just begun to intensify, with manure, burning hay bales and other waste thrown onto highways to form barricades, causing widespread mayhem over the past week.

Major highways were once again closed across the Netherlands as farmers’ direct action blocking roads with manure and burning hay bales continued Wednesday afternoon and into the morning. https://t.co/byw8lmch2z

While the more extreme actions have caused some pushback, farmers still enjoy strong support from the Dutch public, with almost four in ten directly supporting protest movement, and 71 percent say they understand why farmers are outraged by proposed caps on nitrogen, a common fertilizer necessary for many farmers to stay competitive.

“There is less support for radical highways activism, but support for resistance to the government’s nitrogen plans remains strong. Inverted flags are not only hung on farms, but can be seen in many areas. Mainly in the north and east.” according in the Elsevier Weekly magazine.

The magazine noted that inverted flag symbols hang more often in the countryside and poorer urban districts than in “the elite of the South of Amsterdam or the Statenkwartier in The Hague”.

The protest movement has also received support from abroad, including former President Donald Trump, who told a campaign rally last month: “Farmers in the Netherlands from all over are courageously standing up to the climate tyranny of the Dutch government.”

Dutch farmers: The Netherlands is a ‘pilot country’ for a big reset agenda, says Eva Vlaardingerbroek at Breitbart https://t.co/HP6RqbM8PV