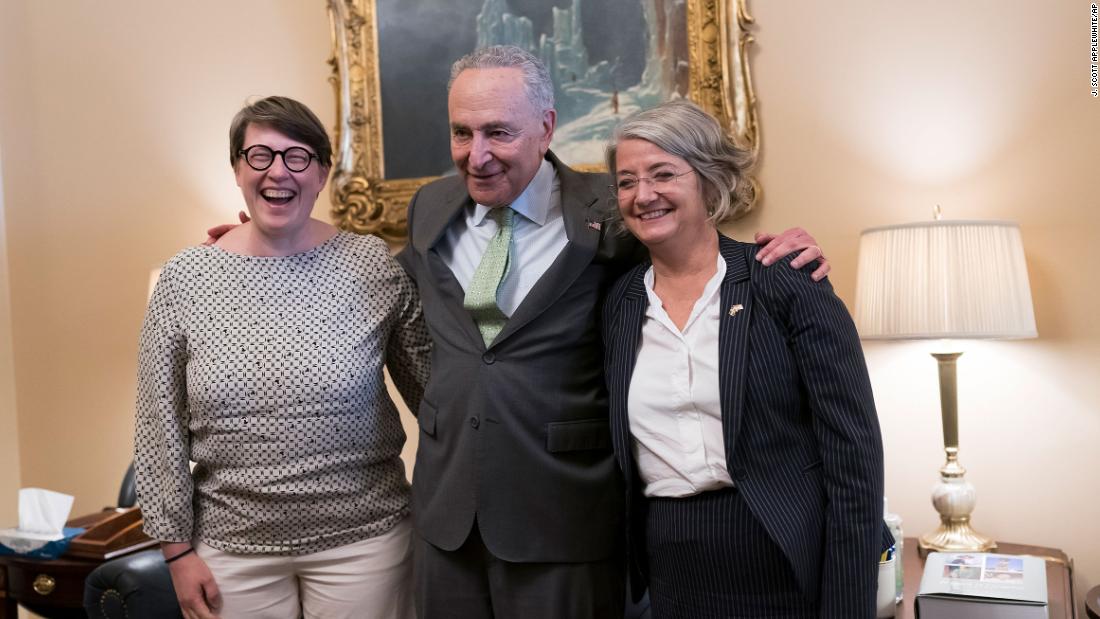 NATO formalized its invitation to Sweden and Finland to join the alliance at the end of June, and the decision must go to the parliaments and legislatures of the 30 member states for final ratification.
President Joe Biden sent the protocols for Senate ratification in July, clearing the way for the vote, which needed two-thirds of the Senate to pass. The final tally of the Senate vote was 95 to 1, with GOP Sen. Josh Hawley of Missouri voting in opposition and GOP Sen. Rand Paul of Kentucky voting in favor.

Senate Majority Leader Chuck Schumer announced Tuesday that a vote will be held to approve the resolution endorsing Sweden’s and Finland’s NATO application and said he had invited the ambassadors from Finland and Sweden to join the gallery during of discussion and votes.

“Our alliance in NATO is the foundation that has guaranteed democracy in the Western world since the end of World War II. This strengthens NATO even more and is especially necessary in light of recent Russian aggression,” Schumer said in remarks of the Senate.

“When Leader McConnell and I met with the Finnish President and the Swedish Prime Minister in May, we made a commitment to do it as quickly as we could and certainly before we go home for the August break,” Schumer said.

Once the Senate approves Sweden’s and Finland’s NATO accession protocols, “the next step in the ratification process is for the President to sign an instrument of ratification of the treaty,” a State Department spokesman told CNN.

“Once the President signs an instrument of ratification, that instrument is deposited (in the case of a multilateral treaty) with the depositary of the treaty,” which in the case of NATO is the Ministry, the spokesman said.

Those steps will not be taken on the same day the Senate approves, and final arrangements have not yet been made to file the instrument of ratification, the spokesman told CNN.

Senate Minority Leader Mitch McConnell predicted in remarks on the floor Wednesday before the vote that it would be “both decisive and bipartisan.”

McConnell argued that admitting Sweden and Finland to NATO “will only strengthen the most successful military alliance in human history.”

McConnell also used his time to take aim at lawmakers who do not support the resolution.

“If any senator is looking for a valid excuse to vote no, I wish them the best of luck,” he said. “This is a national security slam dunk that deserves unanimous bipartisan support.”

Sweden and Finland both announced their intention to join NATO in May after Russia’s invasion of Ukraine caused a sudden shift in attitudes towards joining the bloc.

The reason most countries join NATO is due to Article 5, which states that all signatories consider an attack on one member an attack on all. Article 5 has been a cornerstone of the alliance since it was established in 1949 as a counterweight to the Soviet Union.
Hawley explained his position on the matter in a recent article The National Interest entitled “Why I will not vote for the addition of Sweden and Finland to NATO”.

“Finland and Sweden want to join the Atlantic Alliance to prevent further Russian aggression in Europe,” he wrote. “That’s perfectly understandable given their position and their security needs. But America’s biggest foreign adversary doesn’t look over Europe. It’s in Asia. I’m talking, of course, about the People’s Republic of China. And when it comes to Chinese imperialism, “The American people need to know the truth: the United States is not ready to stand up to it. Expanding American security commitments to Europe now would only make this problem worse – and America less safe.”

Paul similarly described his position in an article in American Conservative.

“As for Sweden and Finland, we still need a serious, rational, objective discussion about the costs and benefits of accepting two historically neutral nations that have such a strategic geographic position relative to Russia,” he wrote. “Prior to the Russian invasion, I would have said no. But given the Russian actions, I have shifted from being against them joining NATO to being neutral on the issue and therefore I will vote ‘present’.”