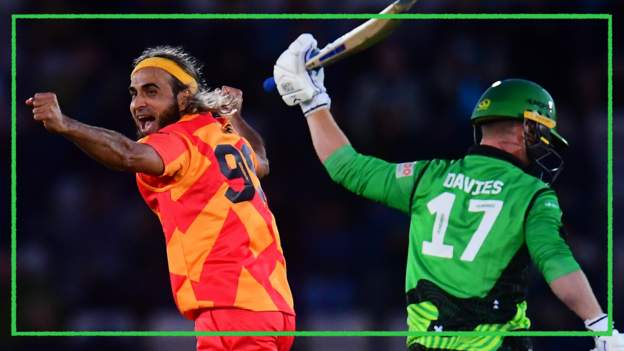 The Hundred is back.

English cricket’s newest tournament returns for a second season with the opening match of the men’s tournament live later on Wednesday on BBC Two from 7pm BST.

More big-name international stars are in town this year, with many of England’s best players also competing once again.

Here’s everything you need to know about The Hundred in 2022.

It all starts again on Wednesday when men’s defenders Southern Brave welcome Welsh Fire to Southampton.

Because many of the women are currently playing in the Commonwealth Games, the women’s competition starts a week later on 11 August.

Last year, Covid-19 meant some big overseas players pulled out of the inaugural season, but this time around some of the world’s best will feature, along with England stars such as Joe Root and Jos Buttler, Nat Sciver and Heather Knight .

West Indies’ Kieron Pollard and Australia’s Glenn Maxwell will play for London Spirit in the men’s competition, while another West Indies superstar, Andre Russell, has been signed by Manchester Originals.

The field is arguably even stronger in the women’s competition with many of Australia’s World Cup winners participating this year, plus the best of the rest.

Australian captain Meg Lanning will play for the Trent Rockets, all-rounder Ellyse Perry for the Birmingham Phoenix and captain Alyssa Healy for the Northern Superchargers.

England Women will be available for the entire competition, as will England Men’s white-ball players such as Butler, who will play for Manchester Originals.

And if you need a refresher, the rules are the same as last year.

In The Hundred, a tournament created to be a simpler and faster form of cricket that hopes to attract a more diverse audience to the sport, each team bats for 100 balls in a match, with the team that scores the most being the winner.

What else should I know?

The Hundred have been dealt a blow by the departure of two of England’s biggest names – Ben Stokes and Jonny Bairstow.

The pair, who would have been available for a few games at first, have been withdrawn to rest before the start of an international Test series against South Africa on 17 August.

England’s other Test players, such as Root and Welsh Fire’s Ollie Pope, could play before joining the squad ahead of the first South Africa Test.

The tournament remains controversial, with critics questioning its relevance and impact on traditional forms of cricket.

That said, around 85% of tickets have already been sold with a significant number of them aimed at women and under 16s.

As last year, the top finisher in the group stage advances directly to the final on Saturday 3 September at Lord’s.

Teams finishing second and third will meet in the qualifiers on September 2 for a chance to join them.

The Hundred isn’t just about the cricket – there will be live music at all 34 matches through a partnership between the tournament and BBC Music Introducing, with Brit Award winners Bastille playing in the final.

In the men’s race Southern Brave they were the dominant side last year and not only did they keep their squad together, including South African wicketkeeper Quinton de Kock and England bowlers Chris Jordan and Tymal Mills, but they also signed Australian all-rounder Marcus Stoinis.

Trent Rockets they have retained Afghan spinner Rashid Khan and any of their star players and batsmen like Dawid Malan and Alex Hales will have a chance. Don’t count out last year’s runners-up Birmingham Phoenix very.

The Braves were also the better team for much of last year’s women’s competition, although they slipped up in the final against the Oval Invincibles.

The Invincible will be hoping to go together and their chances will likely depend on whether inspirational captain Dane van Niekerk and her partner and fellow South African international Marizanne Kapp turn up.

Van Niekerk is sidelined with an ankle injury, while Kapp missed the Commonwealth Games after returning to South Africa for personal reasons, although the London-based side are hopeful both will play fully.

The Hundred will be covered extensively on the BBC.

As well as live TV and radio coverage, there will also be text commentary on the BBC Sport website, as well as video highlights, analysis and reaction.

England internationals Heather Knight, Moeen Ali, Chris Jordan, Mark Wood and Issy Wong will all be part of the BBC commentary teams throughout the tournament.

And on BBC Sounds, Alex Hartley and Kate Cross, now rivals rather than team-mates following Hartley’s move to Welsh Fire from Cross’ Manchester Originals, will provide unique, behind-the-scenes information on the No Balls Podcast.