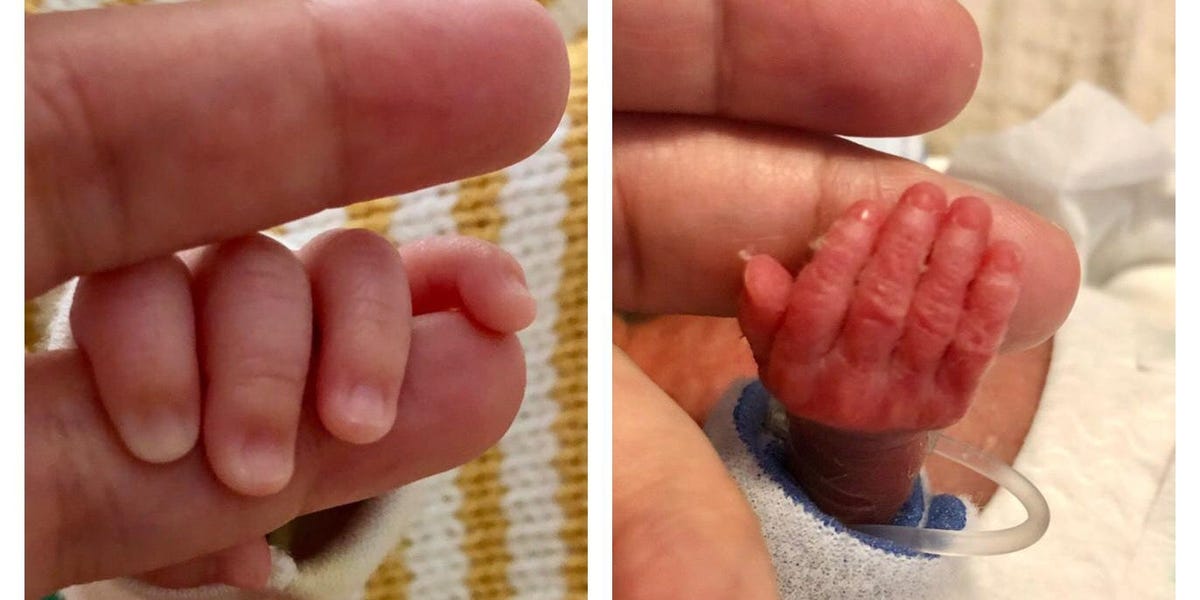 When Cat Gomez takes her son for a walk, people stop to ask how many weeks old he is. At 8 pounds, 5 ounces, he looks like a newborn, but Oliver is over 6 months old.

He is one of the most premature babies ever born in Britain and living proof of how medical advances are giving extremely early arrivals a chance of life.

Born at 22 weeks and three days gestation, Oliver weighed 14 ounces — lighter than a can of beans.

Doctors warned his parents that their little première’s chances of survival were as slim as he was, but his will to live was enormous.

He is especially precious to Gomez and her fiancé, Tom Longstaff, because Oliver’s twin brother, Joseph, only lived four days.

“We had prepared for the worst, but Oliver had so much of a fight,” Gomez told Insider. “We couldn’t be more proud.”

Scans showed that one twin was smaller than the other

The couple from York, England, were surprised but delighted to find out in the fall that they were expecting twins.

The pregnancy was textbook until Gomez fell ill more than four months before her due date. A scan showed that Oliver was smaller than his brother and their amniotic sac may have been leaking. The mother was taken to a hospital that had two cribs ready for neonatal intensive care, but the outlook was bleak.

Before 2019, British neonatologists did not recommend lifesaving treatment for babies was born before 23 weeks because this was considered beyond the “threshold of viability” for a fetus to live outside the womb.

Being born alive this early is also incredibly rare – just 0.15% of all live births in the UK are before 24 weeks.

“We were told by a specialist that the survival rate for a singleton pregnancy born at 22 weeks was very low. As they were twins, the chances were virtually non-existent,” Longstaff, 33, told Insider.

The twins were born 12 minutes apart

Only one other baby, a girl named Stella Heyshe had been born so prematurely in the hospital, but she was 3 ounces heavier than Oliver and was a singleton.

“The boys were rushed to the intensive care unit in plastic bags to keep them warm and hydrated,” Gomez said. “I needed an operation because my placenta wasn’t detaching and I was bleeding heavily. But I was afraid I wouldn’t get a chance to meet the boys live because I was in the OR.”

For the father, it was a shock to see them because the babies’ skin was transparent.

“It was a miracle they were born alive, but there was no false hope. We decided to spend as much time as we could with them,” Longstaff said.

While Oliver was the younger twin, he had fewer complications. Joseph was 2 ounces heavier but had a grade four brain bleed. Doctors said that if he survived, he would be severely disabled. His parents felt the most loving option would be to withdraw from his care.

“We were able to keep Joseph for the first and last time,” Gomez said. “The hospital arranged for a photographer for us and they managed to get him into Oliver’s incubator. We got a picture of them holding hands.”

Joseph died in her arms soon after.

There was no time for grief. They had to take care of Oliver.

The heartbroken parents had little time to grieve, focusing instead on changing teabag-sized diapers and feeding Oliver breastmilk with a syringe. When he was 1 week old, his mother said he had his “amazing” first hug.

“When I first held Joseph, he was dying,” Gomez said. “It was nice to keep Oliver for a happy reason.”

The tiny baby spent 132 days in hospital, learning to breathe without assistance and undergoing 12 blood transfusions. She also needed laser eye surgery and bilateral hernia surgery when she was 15 weeks old.

On May 25, nine days past his due date, Oliver was strong enough to go home. According to the British Association of Perinatal Medicine, one in three babies born before 24 weeks is disabled. But Oliver has few permanent health or developmental problems and was recently taken off oxygen.

His parents’ joy is tempered by thoughts of their lost child, Joseph.

“We’ve put off the mourning – we’ve got to introduce Oliver,” Longstaff said.

Because the boys were identical, the couple will get to see what Joseph would look like as Oliver grows up. And while they’re happy for Oliver’s milestones, they’re heartbroken not to have his twin around.

“I’ll always wonder what Joseph’s character would be like,” Gomez said.

The couple want Oliver’s story to give hope to other parents who have an extremely premature baby.

“We will be forever grateful that the recommendations changed to help babies under 23 weeks and doctors gave him a chance,” Gomez said.