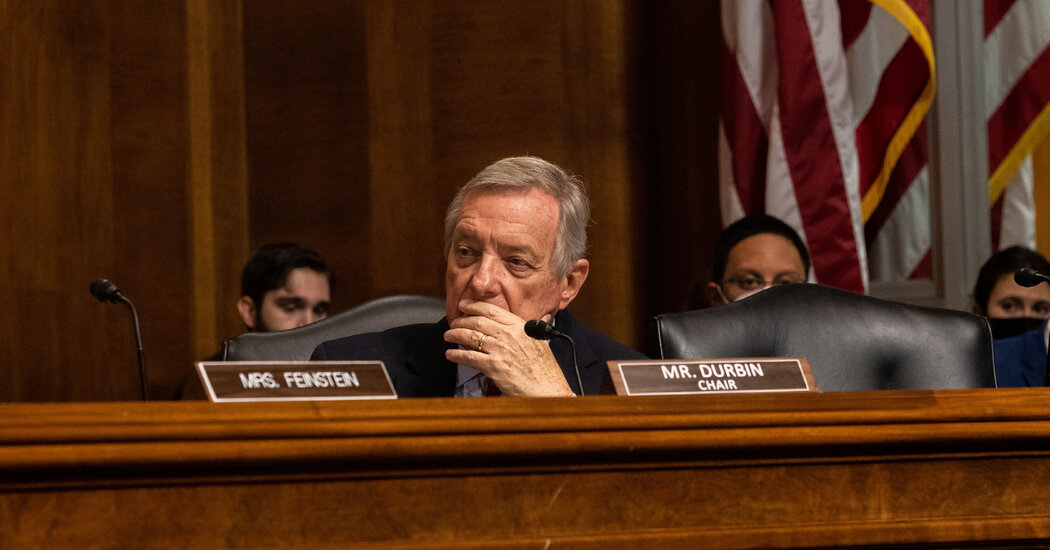 WASHINGTON — The No. 2 Senate Democrat on Wednesday called for an inspector general investigation into missing text messages from top Defense Department officials in the Trump administration about the Jan. 6 attack on the Capitol.

Sen. Richard J. Durbin of Illinois, chairman of the Judiciary Committee, said he was writing to Sean O’Donnell, the Defense Department’s inspector general, requesting an investigation into the disappearance of text messages from the phones of at least five former Trump administration officials, including by Christopher C. Miller, the acting secretary of defense; Kash Patel, the Pentagon chief of staff. and Ryan D. McCarthy, the secretary of the Army.

Officials have been involved in discussions about sending the National Guard to the Capitol during the mob violence.

“The disappearance of this critical information could jeopardize efforts to learn the full truth about Jan. 6,” Mr. Durbin said in a statement. “I don’t know if the failure to preserve these critical government documents since January 6 is the result of bad faith, stunning incompetence or outdated records management policies, but we need to get to the bottom of it.”

A spokeswoman for the inspector general said she was awaiting Mr Durbin’s letter and would “review the letter once we receive it”.

Mr. Durbin’s call for an investigation into the missing Pentagon texts came the same day the Justice Department filed a civil suit against a former White House adviser to Mr. Trump, Peter Navarro, saying Mr. Navarro had not kept the messages from a private email address he used to conduct government business.

In the lawsuit, the Justice Department said it had contacted Mr. Navarro about providing the emails, but that he refused to provide the records “absent a grant of immunity for the act of returning such documents.”

Mr. Navarro was indicted in June on two counts of contempt of Congress after he failed to comply with subpoenas from a House committee on Jan. 6 seeking his testimony and documents.

Mr. Navarro’s lawyers, John Irving and John Rowley, said he had “never refused to provide records to the government.”

“As stated in our recent letter to the Archives, Mr. Navarro has instructed his attorneys to preserve all of these records and expects the government to follow good faith formalities to allow him to produce records,” the attorneys said. in a statement. “Instead, the government chose to file its lawsuit today.”

In the case of the missing Pentagon Papers, Mr. Durbin wrote to the inspector general a day after the American Oversight watchdog sent a letter to Attorney General Merrick B. Garland calling for an investigation. CNN mentioned earlier for the missing agency texts.

U.S. Oversight discovered the issue in March through lawsuits over the Defense Department’s response to public records requests it filed about the Jan. 6, 2021, attack on Capitol Hill. In a court filing, Defense Department and Army lawyers told the group that the government could not produce certain communications because when an administrative official leaves a position, he “presents his government-issued phone and the phone is wiped.”

“For those guards no longer with the agency, the text messages were not preserved,” the attorneys wrote, though they added that they will try to retrieve the texts by other means.

The US watchdog was seeking senior officials’ communications with Mr Trump and Vice President Mike Pence on January 6.

Mr. Miller, Mr. Patel, Mr. Ney, Mr. McCarthy and Mr. McPherson all left the Defense Department or the Army by the end of the Trump administration.

Mr. Durbin’s letter followed called on Mr. Garland last week to undertake an investigation on missing text messages from the Department of Homeland Security from January 5 and January 6, 2021, including those on the phones of Secret Service agents. Also missing were texts from Mr. Trump’s Homeland Security Secretary, Chad Wolf, and Kenneth T. Cuccinelli II, his deputy.

Two top House Democrats have also asked two officials at the Department of Homeland Security’s independent watchdog to testify to Congress about the agency’s handling of the Secret Service’s lost texts since Jan. 6, accusing their office of engaging in a cover-up.