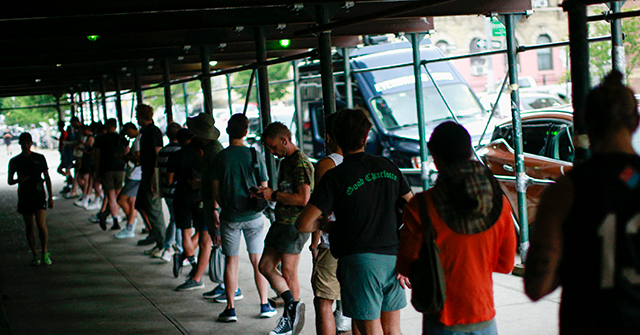 Florida officials hit back at the mainstream media on Wednesday, accusing them of trying to stoke fears about monkeypox.

“Any of these politicians you see out there trying to scare you about this — don’t listen to their bullshit,” Florida Gov. Ron DeSantis (R) said during a press conference Wednesday. He continued, vowing that Florida would not stoke fears, especially with state Surgeon General Joseph Ladapo “at the helm.”

I am so sick of politicians and we saw it with COVID, trying to instill fear in the population. We had people calling, mothers worried about whether their children might catch it at school, and we’re not going to go back to Fauci in the eighties, where he was trying to tell families that they were all going to get AIDS from watching TV.

“They’re going to do events, and we’re not going to go out and try to piss people off and try to act like they can’t live their lives as they normally did,” he continued, noting that some of those states declaring states of emergency they will abuse them, using the powers to curtail the freedom of the American people.

“I guarantee you this will happen. We saw that so much with COVID,” the governor said before Ladapo spoke. Ladapo said, stressing the importance of individuals getting correct information and acting rationally:

“I mean, these people are determined to make you afraid and do whatever they want you to do,” Ladapo continued, noting that the state has about 500 known cases of monkeypox, the vast majority of which are among men.

“Almost all of these cases have been transmitted through physical contact and basically sexual contact for the most part,” he continued, adding that there have been no deaths.

While he said the state has received “something like 24,000 doses of monkeypox vaccine and distributed about 8,500 of them, he added that “there’s really very little data on this vaccine.”

“There’s actually less data on this than there was on the COVID-19 vaccines back in the day. Well, you know, so we have to learn more and we have to make rational decisions and not fear-based decisions,” he added.

According to the Centers for Disease Control and Prevention (CDC), there are 6,326 confirmed cases of smallpox in the US