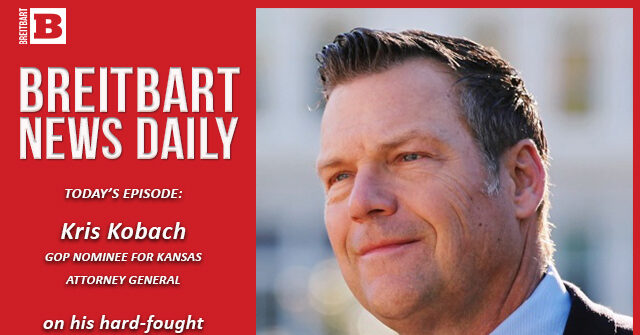 Host Alex Marlow begins today’s podcast with an update on the car crash that killed Indiana Republican Congresswoman Jackie Walorski. Also in today’s opening monologue: the reality is that House Speaker Nancy Pelosi’s visit to Taiwan will likely be far from consistent, Beyoncé gets royal ownership of the wide-awake mob, a US senator officially calls the situation on our southern border ” invasion’ and an electric car bursting into flames melted the internet (pun intended). Of course, Alex has his “Woke Update” as well as some (inevitably bad) financial news about the inflationary Build Back Better-neighboring Joe Manchin/Chuck Schumer spending bill. Our guest today is former Breitbart News contributor and former Kansas Secretary of State Kris Kobach. He is now the Republican nominee for Kansas Attorney General. He breaks down his primary victory, shares what he plans to do if he wins the general election in November and gives his take on Kansans’ decision not to amend their state constitution on abortion.

SIGN UP for free by clicking on your preferred podcast platform below.