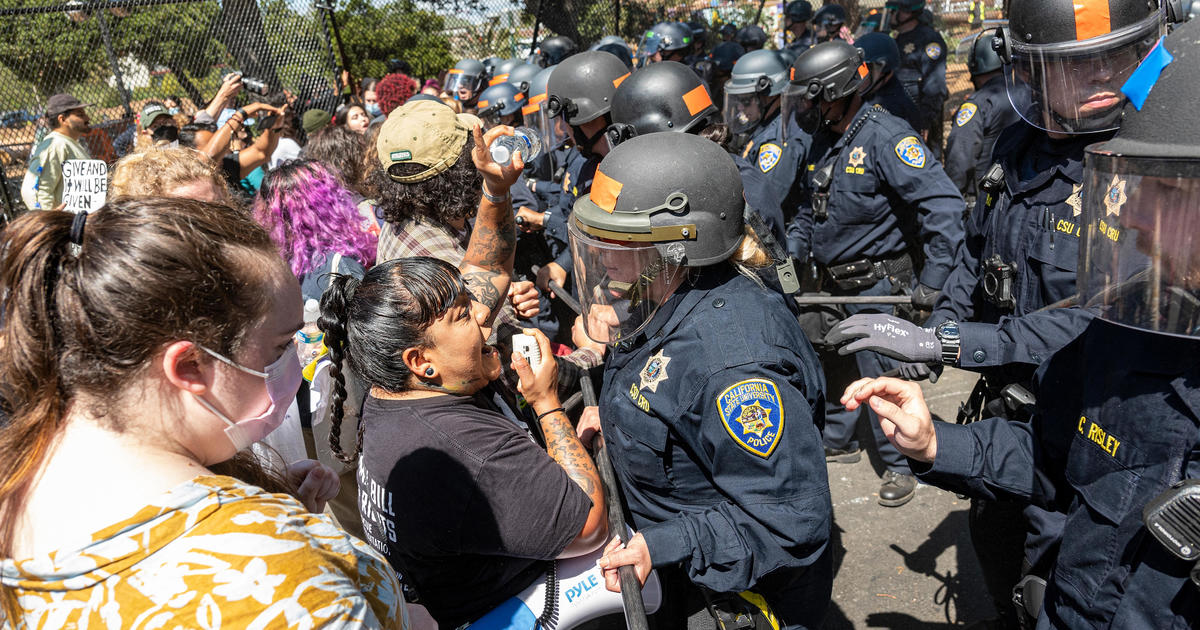 A group of protesters tore down an eight-foot chain-link fence erected Wednesday around Berkeley’s historic People’s Park and confronted police officers standing guard as a construction crew began work on a controversial student housing project. The work was stopped for safety reasons.

The park was cleared Tuesday night and fencing was installed the next day after an Alameda County Superior Court judge ruled Friday that the University of California, Berkeley — the site’s owner — could move forward with its housing plan despite the local groups who were asking to stop it.

By early afternoon, sections of the fence had been cut down by protesters, prompting small celebrations of vindication inside the park. Some of the protesters remained at the site after the university said it decided to halt construction for the day “due to destruction of building materials, illegal protest activity and violence by some protesters.” Some of the protesters climbed onto bulldozers parked near a basketball court in the park.

In a statement, the university said it plans to assess the situation in the coming days to determine the best way to move forward with the “urgently needed student housing project.” The university plans to build a complex that will house about 1,100 students as well as 125 formerly homeless people. Part of the park will be dedicated to honoring its historical significance in the civil rights movement.

The protests began in the spring of 1969, when community organizers banded together to turn a site the state and university took under eminent domain into a gathering place now known as People’s Park. After the university erected a fence around the park, protesters tried to reclaim it, sparking bloody battles that resulted in police shooting and killing one man and injuring dozens of others. That May 15, 1969 riot, known as “Bloody Thursday,” sparked even more protests, and then-California Governor Ronald Reagan called in the National Guard to occupy Berkeley, located about 12 miles east of San Francisco.

“It certainly brings back memories of the arrogance of the university and its unwillingness to consider the concerns of the community,” said Dan Siegel, a 1969 law school student who was arrested on Bloody Thursday after speaking at a campus rally that he concluded by imploring the crowd to “go down there and get the park.” The Associated Press reached Siegel, now an attorney specializing in labor law, Wednesday afternoon after construction on People’s Park was halted.

After the fences were put back up early Wednesday morning, about 100 police officers, some in riot gear, were in the park as crews began cutting down trees to the taunt of spectators who were mostly kept outside by barricades.

Police stared stoically at onlookers amid chants of “power to the people!” before the majority of protesters unanimously walked away after the university’s construction was halted. UC Berkeley police said in a statement that protesters threw rocks, bottles and glass at crews working in the park, which is being considered an aggravated assault. The department did not say if anyone was arrested.