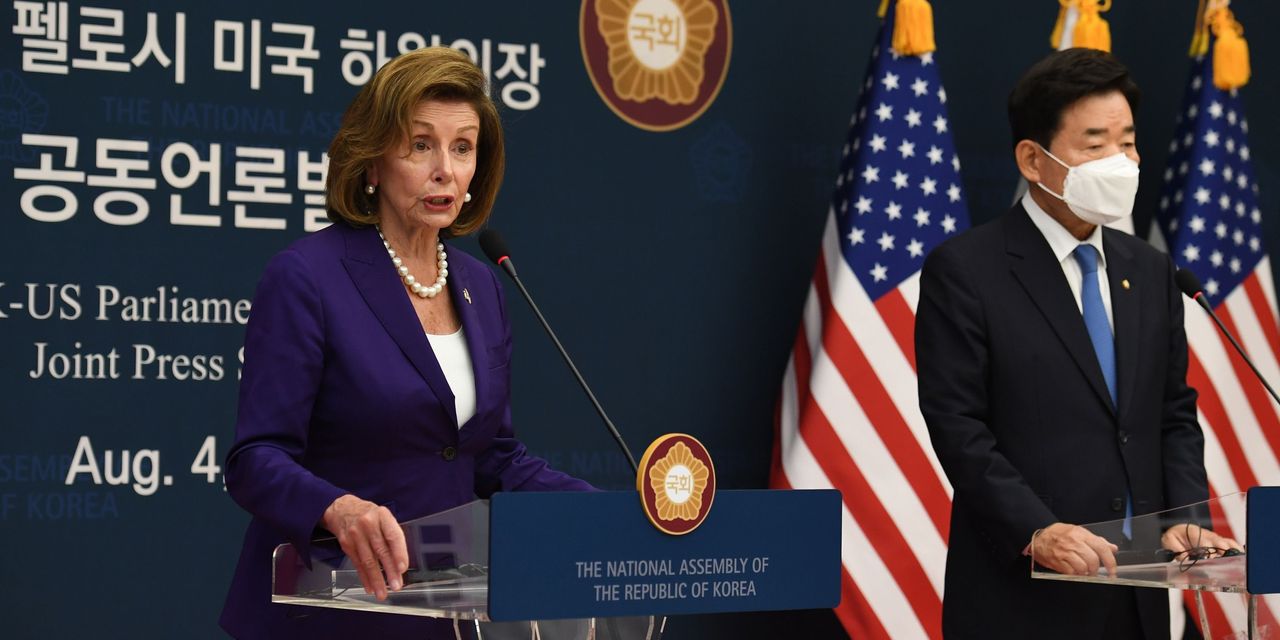 SEOUL—South Korea’s president, in the midst of his summer vacation in Seoul, does not plan to meet face-to-face with visiting House Speaker Nancy Pelosi, likely becoming the only Asian leader on the U.S. lawmaker’s trip to skip a meet- together.

Ms. Pelosi (D., Calif.) met earlier this week with the prime ministers of Singapore and Malaysia. On Wednesday, he sat down with Taiwan President Tsai Ing-wen. The trip ends in Tokyo, where Ms. Pelosi is expected to meet Friday with Japanese Prime Minister Fumio Kishida.

South Korea must carefully address rising tensions between the US and China. The country is a longtime US ally and home to America’s largest military base abroad. But China is, by a comfortable margin, South Korea’s largest trading partner.

On the campaign trail last year, Mr Yun, who took office in May, criticized then-President Moon Jae-in, of the left-wing Democratic Party, for trying to act as a mediator between the US and China, resulting in “crooked policies”. and “bad relations” with Beijing.

The Yun administration, in its first few months, has shown a deep commitment to strengthening ties with the US, but has little to gain by angering China, which could risk trade retaliation and complicate Seoul’s efforts to seek cooperation in relations with North Korea, Choi Jin said. , head of the Seoul-based Presidential Leadership Institute.

“It is still early in his presidency and Yun has to walk a fine line,” Mr Choi said.

Mr. Yoon, a 61-year-old career prosecutor, began a five-day summer vacation on Monday. His original plans were to travel outside the South Korean capital. But due to what his aides said was domestic political turmoil, Mr. Yoon chose to take his vacation in Seoul.

As Ms. Pelosi arrived in the country on Wednesday afternoon, Mr. Yoon attended a theater performance in northern Seoul, even taking selfies with the play’s cast members. Mr. Yoon and his wife watched “Line No. 2 Tenant,” a comedy about a short-term employee who works at a subway station. After the performance, Mr. Yoon grabbed dinner with the cast.

Ms Pelosi met with the speaker of South Korea’s National Assembly and other senior lawmakers on Thursday, discussing regional security, economic cooperation and other issues.

“A relationship that began with urgency and security many years ago has become the warmest of friendships,” Ms. Pelosi said at a joint news conference with her South Korean counterpart after their meeting. Neither politician took questions from the media.

“We want to promote security, economy and governance in an interparliamentary way,” he added.

In addition to the scheduled phone call with Mr. Yun, Ms. Pelosi is scheduled to meet with American troops stationed in Panmunjom, the tiny village located in the demilitarized zone. He is scheduled to leave for Tokyo by Thursday evening.

Ms. Pelosi last visited South Korea in 2015 when she served as House Minority Leader. On that trip, he met with then-President Park Geun-hye, a conservative, and the country’s foreign minister.

Mr Yoon has sought to strengthen the country’s ties with the US while pledging a willingness to stand up to China. He has said he believes there are ways to ensure peace, prosperity and coexistence between the US and China.

Days after his inauguration, Mr. Yun met with President Biden in Seoul, where the two issued a joint statement reiterating the importance of maintaining peace and stability in the Taiwan Strait.

Then in late June, Mr. Yoon, amid protests from Beijing, traveled to Madrid to attend the North Atlantic Treaty Organization summit. In recent weeks, the Yun administration said it would resume full-scale joint military exercises later this month with the US, after exercises had been scaled back for years in an effort to encourage North Korea to engage diplomatically.

Write to Dasl Yoon at dasl.yoon@wsj.com and Timothy W. Martin at timothy.martin@wsj.com