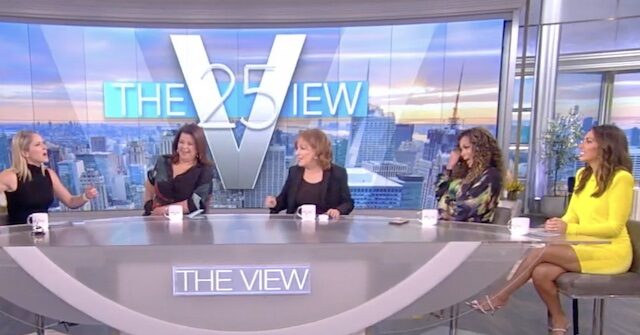 On Thursday’s show, Whoopi Goldberg made the announcements, followed by videos from previous performances.

Former Trump White House communications director Griffin said: “If anyone had ever told me I’d be sitting at a table with Whoopi Goldberg, I would have said you’re crazy. It’s such an honor to be with you ladies every day on this set.”

Griffin continued, “I’ve been trying to find the word to describe how I feel about it, and honorable is the only thing that comes to mind. This show was about, as you all know, Barbara Walters had this vision to bring women from completely different backgrounds, lived experiences, careers to talk about the tough issues that, frankly, our elected officials often don’t face. And we do this every day, and we have important conversations. I can’t tell you how much I’ve learned from all of you and I hope to learn from all of you.”

He added, “If there’s one thing I believe, it’s that there’s more that unites this country than divides it. And I think we can show at this table what our elected leaders often can’t, which is to disagree, but do it respectfully, do it in a fact-based way. We don’t need any of that, you know, conspiracies and lies that have taken over so much of the news.”

Navarro said, “Well, after many years, many hairstyles, many pounds up and down, and guest appearances, as a partner, Snow White, a guest co-host, we’re finally putting a ring on it and making it official.”