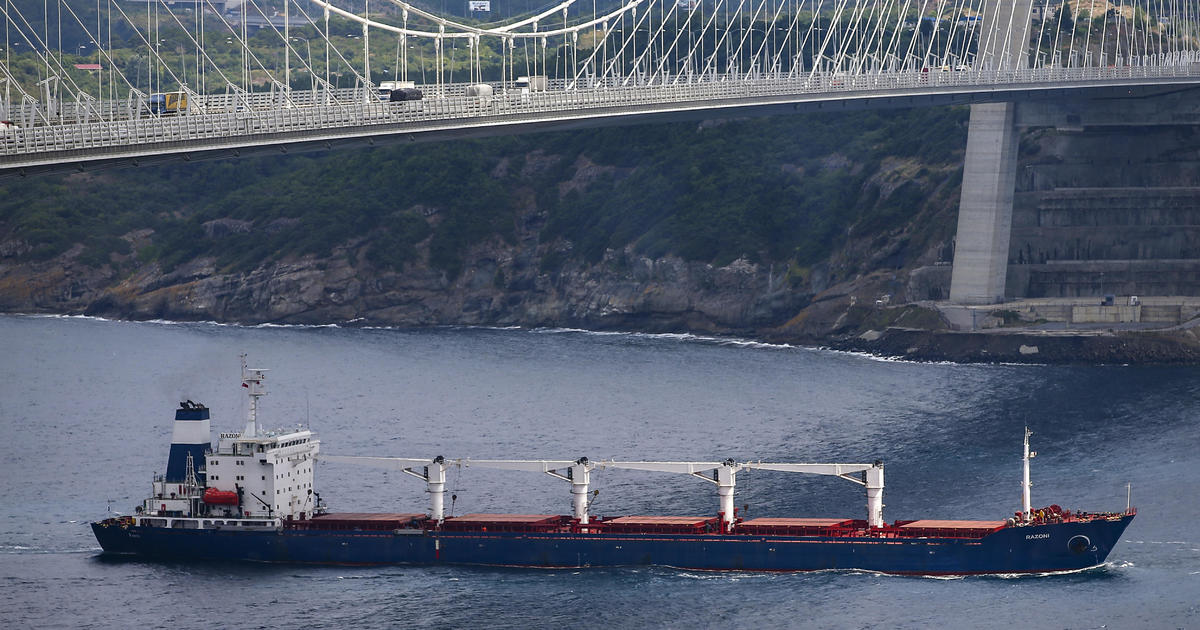 The first ship with grain to leave Ukraine and cross the Black Sea under a wartime The deal passed inspection on Wednesday in Istanbul and headed to Lebanon. Ukraine said another 17 ships were “loaded and awaiting permission to leave”, but there was no word yet on when they might depart.

Ukraine is a major global supplier of grain, but the war had blocked most exports, so the July 22 deal was aimed at facilitating food security around the world. Global food prices have soared in a crisis caused by war, supply chain problems and COVID-19.

Although US Secretary of State Antony Blinken called Razoni’s trip “an important step”, no other ships have left Ukraine in the past 48 hours and no explanation has been given for this delay.

A UN statement said inspectors had “obtained valuable information” from the Razoni’s crew about its journey through the Black Sea maritime humanitarian corridor and the coordination center was “detailing procedures”.

Turkey’s Ministry of National Defense tweeted a photo of an inspector reaching into Razoni’s hold and touching some of its 26,527 tons of corn for chicken feed. Razoni’s horn blew as the inspectors left the ship and then headed for Lebanon.

The controls seek to ensure that outgoing cargo ships carry only grain, fertilizer or food and no other goods, and that incoming ships do not carry weapons.

An estimated 20 million tonnes of grain — most of which is said to be for livestock — has been stuck in Ukraine since the six-month war began. Ukraine’s top diplomat said on Wednesday that more ships are ready to transport much-needed grain and food from the country’s Black Sea ports.

“More ships are already ready to depart. They will depart from the ports that are part of the grain initiative according to the agreed schedule and we hope that everything will go well and the Russian Federation will not take any measures that will destroy agreements,” he said Foreign Minister Dmytro Kuleba at a joint press conference in Kyiv with his Estonian counterpart.

“Now it is Ukraine that is literally saving the world from further increases in food prices and from starvation in individual countries,” he said.

However, a trip to the Black Sea carries significant risks due to the war. Two civilian ships struck explosive devices there last week near the mouth of the Danube’s Bystre River, according to Bridget Diakun, a data reporter at Lloyd’s List, a global shipping publication.

Analysts say the authorities’ first priority is to get out ships that have been stuck for months in the three Ukrainian ports covered by the deal. Sixteen ships loaded with grain have been stuck in the ports of Odessa and Chernomorsk since the Russian invasion, according to Lloyd’s List.

The UN official who helped negotiate Russia’s deal with the UN aimed at securing unrestricted access to world markets for the country’s food and fertilizer says there are still hurdles to overcome.

U.N. trade chief Rebecca Greenspan told a U.N. news conference Wednesday via video from Geneva that some obstacles Russia faces in financing, insuring, shipping and transporting its grain and fertilizer have been clarified by the United States and the European Union.

But he said there was still one major hurdle: getting the private sector to accept that the UN-Russia deal would allow their companies to participate in sending Russian grain and fertilizer to world markets without the threat of sanctions.

There are no US or EU sanctions on food or fertilizer exports, but companies in related sectors are reluctant to take part.

Greenspan, the secretary-general of the United Nations Conference on Trade and Development, said that some grain and fertilizers are being exported from Russia, but at a very high cost. He explained that half of the increase in grain prices comes from increases in transportation and logistics costs.

“That’s the pressure we want to reduce,” he said.

Greenspan said the US and EU clarifications were being evaluated by the private sector “as we speak”.

Grain stocks are expected to continue to rise. Despite the war, Ukrainian Prime Minister Denis Smykhal estimated that his country would harvest up to 67 million tons of grain this year, up from 60 million tons last year.

A senior official of a leading Ukrainian agricultural association estimated that Ukraine will have about 50 million tonnes of grain to export this year.

Before the war, Ukraine exported about 5-6 million tons of grain a month, according to Denys Marchuk, deputy head of the All-Ukrainian Agrarian Council.