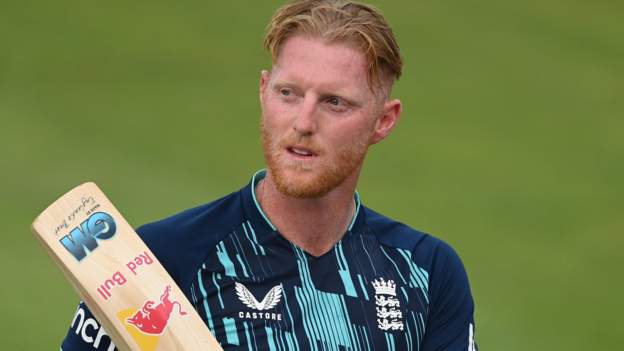 Ben Stokes’ warning about the schedule’s demands on top players has been “absolutely heeded”, according to England and Wales Cricket’s interim chief executive Claire Connor.

He and Jonny Bairstow have also dropped The Hundred to rest.

“We need to listen to those who are expected to deliver, entertain and inspire,” Connor said.

Connor is likely to be in the interim role until at least the fall and has not ruled out applying for the job full-time. Separately, a new chairman of the board is to be appointed shortly.

“We listened carefully to Ben”

After announcing his retirement from ODIs, Stokes said: “There is too much cricket for people to play all three formats now.

“We’re not cars, you can’t just fill us up and we’ll go out there and be ready to refuel.”

Connor, who has won more than 100 caps for England, said she did not have “all the answers” to easing the busy calendar but understood the need to limit what was asked of the players.

“We listened carefully to what Ben said,” he said. “It’s something we have to fight – that’s what we are with the players, the other boards, the International Cricket Council and the Professional Cricketers’ Association.

“Players are at the heart of what we need to do to move the game forward. Without them, we don’t have a game that has the wow factor to inspire.”

While Connor acknowledged the damaging absences of Stokes and international team-mate Bairstow, along with injured England captain Heather Knight from the women’s tournament, she said the competition would not suffer from “second season syndrome”.

Connor pointed to ticket sales reaching 500,000 before the tournament began, just 10,000 less than the total for last year’s inaugural event.

“The whole game should be confident that we are in for another great month of 100-ball cricket,” he said.

“The healing has begun”

Connor took over as chief executive after a year in which English cricket has been rocked by allegations of racism from former Yorkshire player Azeem Rafiq and others.

Rafik called the English game “institutionally racist”, while a parliamentary report recommended that public funding be withheld unless there was “sustained, demonstrable progress” to eradicate “deep-rooted racism”.

In response, the ECB published a five-point plan in November, including “12 tangible actions” aimed at tackling discrimination and racism.

“The game came together and apologized to the people it had let down,” Connor said. “We are not where we need to be, but we are making very good progress.

“I think the healing has begun. We fully recognize that we are not yet the modern, inclusive sport that we need to be for everyone to feel welcome in it.

“It’s about cricket being a game for everyone, gender balance, serving communities that have failed in the past.”

In June, Yorkshire and a number of individuals were charged by the ECB in relation to allegations of racism at the club.

One of those accused, former manager Andrew Gayle, said he would not take part in the proceedings, had not been interviewed by the ECB and “his life has been defined by baseless allegations”.

However, Connor said “categorically” that the disciplinary process, led by Cricket’s independent Disciplinary Committee, was fair to all parties.

“I’m under no illusions about the well-being challenge it presents to a lot of people,” Connor said.

“I’m absolutely confident that it’s strong, it’s fair, and we’re going to reach a conclusion that we need to reach in order to move forward.”

Independent of the racism inquiry, the Independent Commission for Equality in Cricket is due to publish a report later this year.

“I don’t think we should be under any illusions that the game probably has another period of suffering to accept and develop,” Connor added.

“What they are telling us I trust will be a fair picture of our reality and the truth where cricket still needs improvement. We have to accept that.”

Former England captain Andrew Strauss is leading a “high performance review” designed to make the men’s national team the best team in the world across all three forms of the game.

Part of the review is likely to include recommendations for changes to the structure of the domestic game.

On Wednesday, The Cricketer reported on a fan survey showing opposition to a reduction in County Championship games, which Stokes then appeared to support on Twitter.

“Ab so bloody yummy,” she wrote.

While Connor explained it is too early to know what the recommendations will be, she said “unpopular” decisions could be made if they are for the betterment of the England squad.

“The core mission of the high performance review is for the England men’s team to be the best in the world across three formats,” he said.

“The men’s domestic structure is a key part of that in terms of where players are developed and how English cricket as a system plays its part in that overall ambition.

“It’s an opportunity for cricket to move forward and have systemic improvements.”

Connor admitted she was “in tears” when she saw the England team take part in the Commonwealth Games opening ceremony, with a women’s T20 competition marking cricket’s return to the event after a 24-year absence.

More than 150,000 tickets have been sold for the games at Edgbaston, meaning the Games will have a higher average attendance than any other women’s world cricket tournament.

Although Connor admitted it was “50-50” whether cricket would succeed in its push to be included in the 2028 Olympics in Los Angeles, she believes the Commonwealth’s success will boost the bid.

“Viewing numbers, ticket sales and momentum around women’s sports will paint a favorable picture,” he said.

“Discussions are ongoing with the ICC and the International Olympic Committee about how cricket could appear in the 2028 Olympics and what that would be. Would it be a minors, men’s and women’s tournament or just women’s? All this they have to work through.”

When asked if she wanted to keep the chief executive position on a permanent basis, Connor admitted she had not been “fired up” by her interim time in the role.

“It’s an honor to be in this position,” he said. “I’m enjoying it and I’ll see where I’m at in the next few months.”