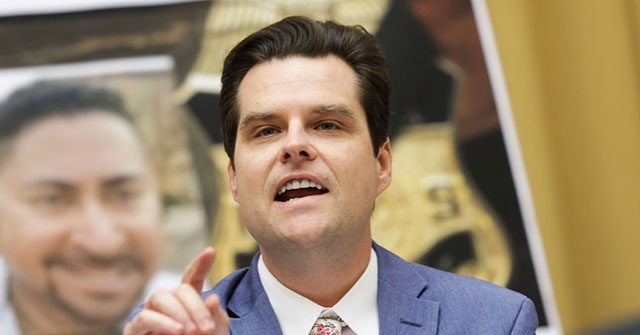 On Thursday on FNC’s “Tucker Carlson Tonight,” Rep. Matt Gaetz (R-FL) warned that efforts to strengthen the Internal Revenue Service (IRS) were an effort by the Biden administration and Democrats to “weaponize” the government against her people.

The Republican congressman from Florida said that combined with Democrats’ opposition to firearms, prompted him to propose the legislation.

“Well, Joe Biden is raising taxes, he’s disarming the American people, so of course, they’re arming the IRS like they’re getting ready to take over Volusia,” he said. “As you mentioned, five million rounds of ammunition, 4,500 firearms, automatic weapons, and $731,000 of taxpayer money were spent this year to literally arm your government against you.”

“So it’s not that Joe Biden and the Democrats hate guns,” Gaetz continued. “They just hate law-abiding Americans who have them, and they take people’s money to go and have their own little private arsenals, and it’s especially outrageous from a country that militarizes its bureaucracy and then forces its grandmothers to go and protect for themselves on dangerous roads because they reimburse the police and have cashless bail and other criminal justice policies that wake up in arms. That’s why I’m introducing legislation to stop it.”