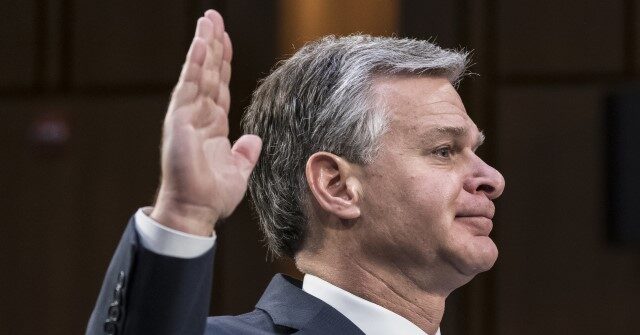 Sen. Josh Hawley (R-MO) called out FBI Director Christopher Wray during a hearing Thursday after Wray refused to explain why his agency is seeking information on concealed carry permit holders in Missouri.

Hawley cited the FBI’s search for information on concealed carriers in Missouri, saying, “Why are you asking [this information] now, from the state of Missouri, from our sheriffs, when you didn’t ask for it in the past?”

Wray replied: “I will have to get more information before I can give you a written answer.”

Hawley followed up with another question. “What steps would the FBI take to make sure the information stays private if you can get it from these sheriffs across Missouri?”

Ray said, “Again, same answer, I really want to be careful not to speak when I don’t have all the facts.”

Howley said, “Okay, so you’re not going to answer my questions.”

Ray suggested that he was just going to answer the questions in another way rather than in person.

Hawley suggested that Wray’s refusal to answer was because he was “under oath.”

The FBI wants to check the sensitive personal information of concealed carry permit holders in Missouri, and yet its director can’t answer simple questions about why they need to check this information. @SenHawleyPress ⁰⁰We know why. pic.twitter.com/iL6P0wUHP1

Hawley went on to explain that he sent Wray a letter notifying him in advance that the issue of seeking information on concealed carriers in Missouri would come up at the hearing.

He said, “I’m disappointed, honestly. I sent you this letter days ago. This was on your radar screen. Our state attorney general sent you a letter prior to this. Did you know that. This is of considerable concern. It directly affects Missouri law.”

Hawley said Ray was putting state law enforcement in a bad spot because “state law says they can’t turn over these personal records,” yet Hawley claimed the FBI is looking for the records anyway.