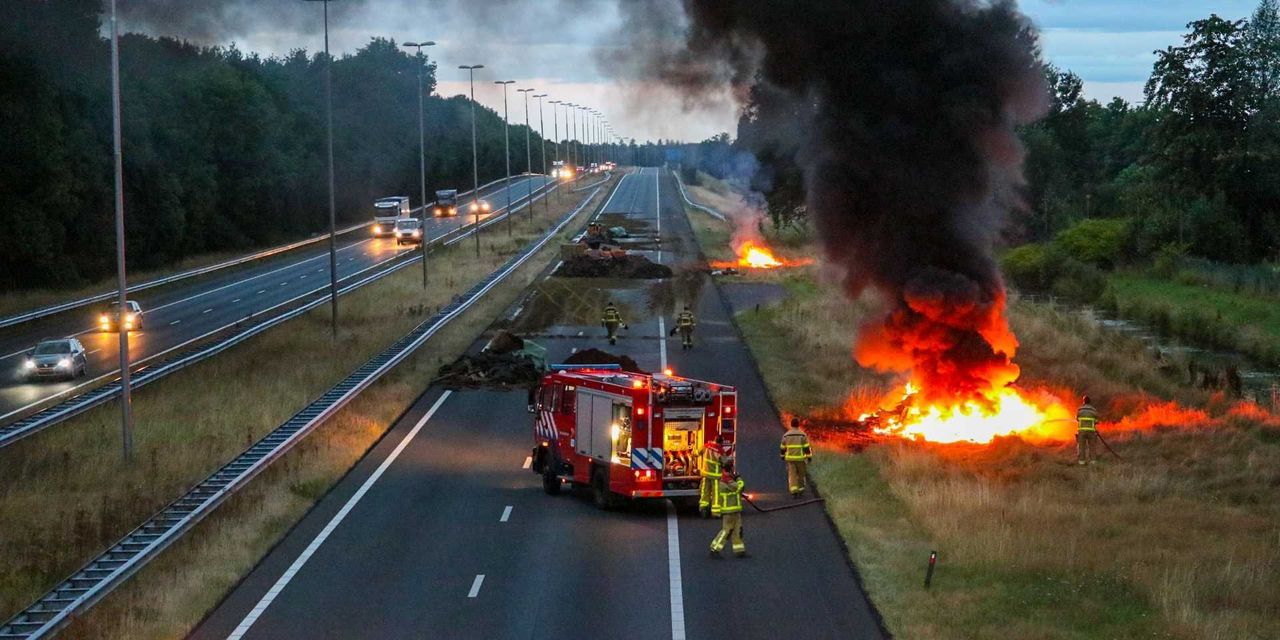 Trienke Elshof’s family has been milking cows in the northern Netherlands for more than three decades, but a policy recently proposed by the Dutch government to reduce agricultural greenhouse gas emissions threatens to close their dairy.

Dairy cows are as much a feature of the rural Dutch landscape as windmills and canals. In the cities, milk is usually the drink at business lunches and cheese shops abound.

But soon thousands of farms may have to drastically cut their cattle herds to comply with government policy. For farmers like Ms Elshof, who hopes to give her 250 dairy cows to her two sons, the proposal is a disaster.

Dairy farmers like Ms Elshof have been protesting since June, when the Dutch government unveiled plans to halve ammonia and nitrogen emissions by 2030. Animals release the chemicals through their urine and feces.

Farmer advocates say the proposal threatens almost all agriculture in the Netherlands – the world’s second-largest agricultural exporter by value after the US – at a time of heightened global food insecurity sparked by Russia’s blockade of Ukraine’s grain exports.

Few countries are more exposed to the effects of climate change than the Netherlands, where more than half of the population lives below sea level and is therefore at risk of flooding. But even in one of the world’s richest countries, voters and politicians oppose policies to reduce emissions that scientists say are causing average temperatures to rise.

Across Europe, the pushback has ranged from France’s yellow vest movement that began in 2018 to repeated attacks on the European Union’s green policies by governments in Hungary and Poland. Disputes, mainly between environmentalists and business interests, have repeatedly pitted rural dwellers against urban dwellers, upsetting national politics.

Prime Minister Mark Rutte and his advisers are meeting Dutch farmers’ organizations on the issue for the first time on Friday, a government spokeswoman said. The meeting comes after a recent poll showed Mr Rutte’s ruling centre-right party has sunk in popularity.

According to leaked Dutch government estimates published by local media, around 11,200 livestock farms will have to close and 17,600 farmers will have to reduce their herds to meet emissions targets. A finance ministry spokesman called the estimates “calculations” and said the targets were still being adjusted.

“The government has hidden the consequences of its policy,” said Pieter Omtzigt, an independent member of the Dutch parliament. “This is a complete shake-up of the entire agricultural sector.”

Mr Omtzigt said the policy was being hastily implemented “without considering the consequences”. Mr Rutte’s office did not respond to requests for comment. The time of the vote on the bill remains unclear.

Thousands of farmers across the Netherlands demonstrated this summer by driving placard tractors with signs along country roads and shouting slogans in town squares. In a recent poll, almost two-thirds of the Dutch population said they understood the farmers’ concerns.

Some protesters have escalated their actions, throwing manure on major highways and setting hay bales on fire. Police have reported several accidents after drivers attacked the roadblocks.

Mr Rutte criticized in June how farmers were protesting.

The proposed policy will reduce nitrogen and ammonia emissions by 50% to protect a network of natural areas across the EU called Natura 2000. The natural zone, mostly private property, covers 18% of EU land and more from 8% of its marine territory, offering refuge to endangered species and habitats. Natura 2000 covers around 7% of the Netherlands.

Figures from the Dutch government show that nitrogen deposits exceed critical levels in designated nature areas, although they have declined in recent decades.

“The task for agriculture in particular is huge,” said the government’s nitrogen policy announcement.

The government said it would allocate an additional $24.7 billion on top of the existing $7.1 billion to bring three-quarters of Natura 2000 areas to a “healthy level” by 2030.

Farmers, the government said, have three options: “Become more sustainable, relocate or end [their businesses].” The government offers buyouts to farmers, but advocates say few have taken them up.

Recommended nitrogen cuts range from 12% to 95% by region. Ms Elshof’s farm, less than a mile from a Natura 2000 site, will have to reduce nitrogen production by 70%.

“There is no way you can become a farmer with this policy,” said Sieta van Keimpema of the Farmers Defense Force, a leading Dutch farmers’ organization. He said farmers “will lose everything as a result, and also be in a profession where you can no longer find work.”

Jesse Klaver, the chairman of the Dutch Green party, said it was “inevitable to buy out farmers and reduce livestock”, adding that manufacturing and aviation would also have to change.

The Dutch agricultural sector produced around 7% of gross domestic product in 2019, according to the central statistics office. Around 52,000 Dutch agricultural enterprises employed more than 150,000 people in full-time jobs in 2020.

“The proposed policy will have devastating effects not only on agriculture, but also on the economic, social and cultural sustainability of the rural Netherlands,” said Wytse Sonnema of LTO Netherlands, a national agricultural union.

Farmers began protesting in late 2019 after a Dutch high court ruled that government laws on building permits and agricultural activities that emit large amounts of nitrogen breached EU law. Caravans of farmers drove tractors along major highways to government buildings in The Hague, flashing their lights in protest.

Protests started again this summer after emissions targets were released. A peaceful demonstration in a small village east of Amsterdam attracted around 15,000 people, Mr Sonnema said.

The protests involving destruction of property and barricades have drawn sharp criticism from the government.

“Where possible, the police will track you down. A criminal record has consequences. Use your brain,” Justice Minister Dilan Yeşilgöz-Zegerius said on Twitter last month.

Ms van Keimpema of the Farmers Defense Force called the escalation of tactics “a sign of outrage, but also of the fear people have for the lives they live”.

One company, Lely Industries NV, is developing a system that separates cow manure from urine on barn floors, turning up to 70 percent of nitrogen emissions into fertilizer that farmers can use.

“This is an issue that we all carry, not just farmers,” said André van Troost, CEO of Lely.

Write to Lucy Papachristou at lucy.papachristou@wsj.com