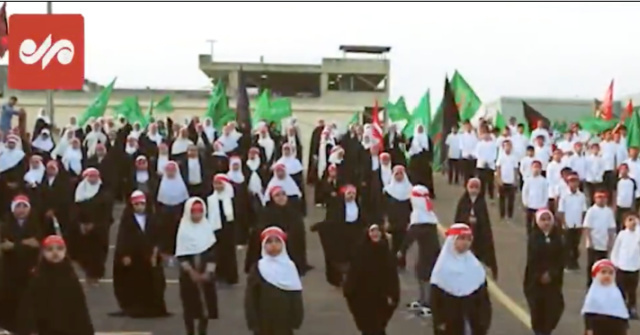 Iran’s state media broadcast a video of American children from the heart of Texas, chanting references to Iran’s supreme leader and pledging allegiance to him while glorifying martyrdom.

The state of Iran Fars News Agency linked to the Islamic Revolutionary Guard Corps (IRGC) along with other Iranian media, including Mehr News Agency linked to Iran’s Ministry of Intelligence and Security (MOIS), promoted a video last week showing young children and teenagers in traditional Islamic dress outside the Houston Islamic Education Center.

In the two-minute excerpt that was originally posted on the Islamic Education Center of Houston’s Facebook page but was later removed by YouTube On Friday, Houston-area children — wearing headbands and waving flags — were seen singing a modern Iranian religious song, some parts in English, as they pledged allegiance to the regime’s Supreme Leader, Ayatollah Ali Khamenei.

According to the centre’s flyer advertising the event for “boys and girls aged 4-14”, the song is described as “an expression of one’s love for the Imam of our time”. The chant’s lyrics, titled “Salam Farmandeh” or “Salutations, commander”, include expressions of wishes to become child soldiers for Khamenei as well as vowing to be a martyr.

They sing “Don’t look at my little one” “I’ll be your soldier” “I swear. One day when you need me I will be a martyr” pic.twitter.com/fYGZJOQ2es

The original Persian song also references slain Iranian general Qassem Soleimani with a line that states: “I promise to be your Hajj Qasem.”

The clip posted on Twitter received over a quarter of a million views in about a week.

Houston Imam Faheem Kazimi, chairman of the Islamic Education Center’s board of directors, compared the song to a “catchy” Beatles track.

“Many translated it into their language and adapted it,” he said. “And when you have religious activity, people ask that if they can (perform it), we have that freedom of religion and free speech, so we said, ‘Sure, why not?’

Breitbart News reached out to Kazimi for further comment, but was unable to receive a response.

According to Tehran Timesthe song that pxpress’s support for the Islamic Revolution “revealed the vivid hopes of Iranian families and their children in the Islamic Republic in their quest to achieve the goals of the Revolution.”

The Houston Chronicle which is presented a front page piece expressing concern over the issue, claiming that Houston-area school children had become “the face of Iranian propaganda.”

Some opponents of the Iranian government criticized the video, especially its references to child soldiers and Iran’s supreme leader. Meanwhile, Iranian officials point to the video as evidence of their influence in the US https://t.co/HVfvCOcIJF

Houston-based Iranian businessman Karim Zangeneh, who is affiliated with the Organization of Iranian American Communities, warned of the agenda behind the video.

It wasn’t the first time the Houston center has sparked controversy.

In 2019 he carried out a ceremony to mark the 40th anniversary of the Islamic Revolution in Iran, where children sang: “Khamenei is our leader, we are his soldiers.”

Last week, Iran’s state media published a video clip bragging about the regime’s nuclear capabilities, claiming it can — in an instant — “transform” its nuclear program into an “atomic military,” creating a “nightmare” for Israel and the West, while warning of the “his ability” to turn New York into a pile of rubble from Hell.”

Iran’s IRGC-affiliated state media announces in a new video that the regime is now capable of rapidly building nuclear bombs and its ICBMs can “turn New York into rubble and hell.”

Will the US and EU finally reactivate the 6 UN Security Council resolutions?

The clip was released on Saturday by Iran’s Bisimchi Media Telegram channel linked to the Islamic Revolutionary Guard Corps and is titled “When will Iran’s nukes wake up from their slumber?”

According to the BBC, the head of Iran’s Atomic Energy Organization, Mohammad Eslami, he seemed to confirm many details in the video on Monday, saying the regime currently has the “technical capability” to build a nuclear bomb but has not yet made the political decision to do so.

The statement echoed a similar statement by senior Iranian adviser Kamal Kharazi, who last month said the Islamic Republic “has the technical means to produce a nuclear bomb, but there has been no decision by Iran to build one.”