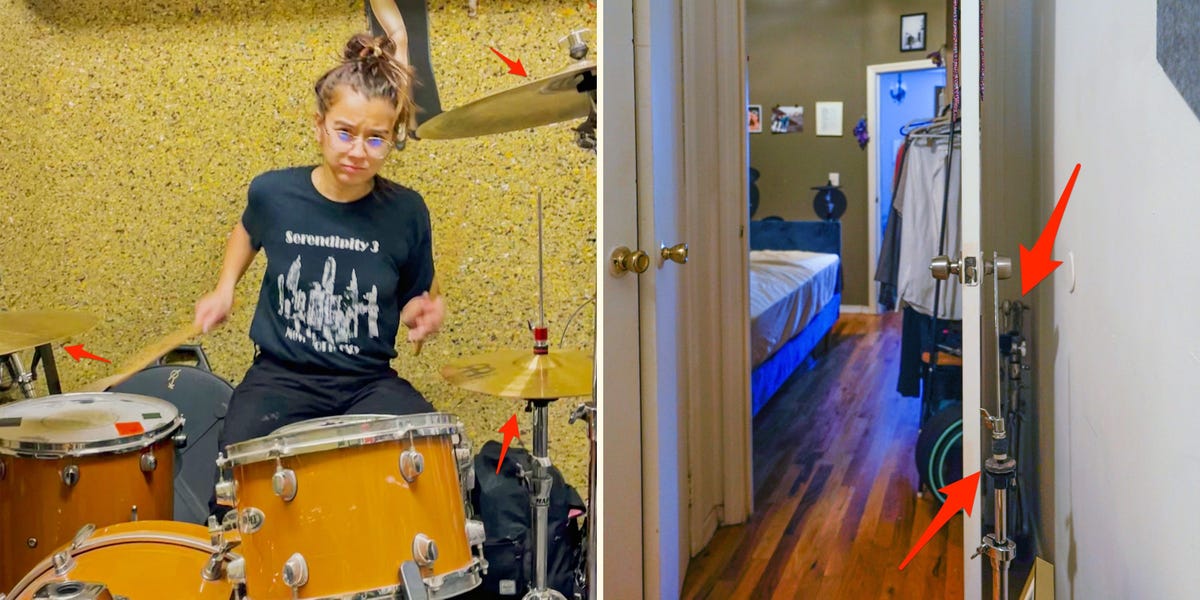 I’ve been a drummer playing shows in NYC since I moved here in 2019.

I’ve played with various bands in venues from Manhattan to Brooklyn to Queens, and right now I’m in a band called “General Approval” which plays shows every two weeks. So I need access to the drums almost every day to practice or play a gig.

Acoustic drum kits have many components and typically take up about 20 square feet of space, according to a drummer’s blog called Drumming Basics.

According Basic drumsa blog started by a musician to share what she’s learned about drumming, the average full-size acoustic drum set takes up about 20 square feet of space.

Drum kits typically include a kick drum and pedal, a floor, one or two racks, a snare drum, three or four cymbals, stands for each cymbal, and the snare drum.

That’s a lot of parts to worry about storing and transporting.

The number one way I save space as a drummer is to practice in a shared rental space that already holds most of a drum set and costs $125 a month.

My band practices in a space we rent with a handful of other bands. It has a shared kick drum, strums and stands, which are the biggest part of a drum kit, so I don’t have to worry about putting them on for practice.

I’ve practiced at six venues since moving to New York, and all of them have included a communal drum set where drummers only need to bring their own snare and cymbals.

My band rent share is currently $125 a month which I think is a steal considering New York rental prices are skyrocketing.

I don’t need to house the biggest acoustic drums in my apartment, as every venue I’ve played in provides a kick drum and toms.

When it comes to playing shows, different venues have different backlines or music equipment provided.

I’ve played about a dozen venues since moving to New York—from Our Wicked Lady’s rooftop stage in Brooklyn to the Mercury Lounge on the Lower East Side—and each one has offered a kick drum, toms, and a snare stand.

So I don’t bother having mine.

The only pieces of an acoustic kit I need take up only 10 square feet of space in my apartment, and I use a small electric kit for practicing at home.

I use my electric kit for practicing at home because it’s quieter and takes up less space than an acoustic kit.

I keep the kit in the guest room because it fits perfectly between the wall and the bed along with my electric guitar and amp.

I don’t often need to amplify the sound, so I rarely connect the kit. I keep the cables on a shelf under the kit to make the space look less cluttered.

Because it’s not my main practice time with the band, I don’t often feel the need to plug in my electric kit. Practicing on my untethered kit helps me build muscle memory more than anything else.

Keeping the cords hidden makes the space look much cleaner.

My acoustic drum parts – the kick drum, cymbals, pedal and sticks – all fit into three storage bags under my bed.

I keep the parts of an acoustic drum kit under my bed that I need for practicing and playing venues in New York. That way, they don’t take up space in my apartment.

Eventually, I want my own full kit, but for now, my setup fits best in my tiny NYC apartment.

Having my own audio kit would be a dream come true. It would give my band the freedom to play shows outside of venues with backlines. Plus, I’d know I had a reliable kit that suited my style for each show, rather than having to make it work with a different kit every night.

But for now, my little storage system works just fine in this apartment.