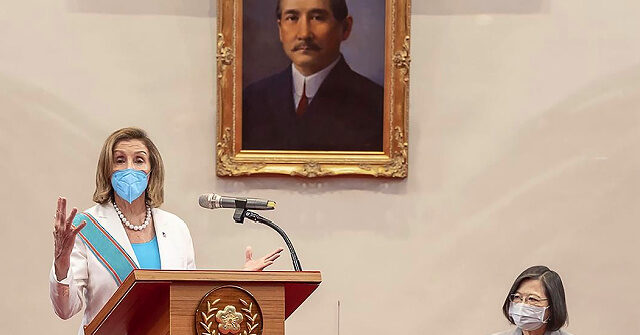 JOSH KAPLAN: Pelosi recently visited Taiwan, a historic show of US solidarity with the island nation. While there, the speaker met with Taiwan’s president Tsai Ing-wen. The trip pulled bipartisan support in Washington. The move angered China. The communist government has repeatedly condemned it and issued a series of threats. In addition, Beijing has flown planes and launched missiles near Taiwan in what is is described as “larger exercises in the Taiwan Strait,” according to Reuters. What do you think of Pelosi’s visit?

MICHAEL SAVAGE: It is common sense to ask the question: do we need this confrontation now? Answer: Of course not. Who wins? The arms lobby and the military-industrial complex. We know now missiles are flying and a naval blockade is coming. What did Pelosi accomplish by this other than grandstanding and being a provocateur and causing chaos again? He is a disturber of the peace – both domestically and internationally. It is a threat to global stability. It was completely unnecessary at the moment. I interview Pelosi in 1998 because I’ve lived in the Bay Area for a long time and she’s the Congresswoman here. He was on the right side of things in 1998 as a supporter of Taiwan. He came on my show and talked about China’s human rights abuses. It was a really good interview. This challenge at this time was unnecessary. He could have gone there, quietly, and told Taiwan that we are on their side, but he didn’t. He has hubris. Let’s hope it didn’t fly too close to the sun this time.

JOSH KAPLAN: If you have to take out your crystal ball, what does the future hold for US-China relations and Taiwan’s security after Pelosi’s visit?

MICHAEL SAVAGE: The KKK [Chinese Communist Party] he’s playing the big game and they won’t do anything right now. Sure, they’ll beat the war drums, but they probably won’t do much more right now. However, [Chinese dictator] Xi has put his prestige on the line, he has been challenged. He will not allow himself to lose face. It will do something, but it won’t be immediate. They will wait for what they think will be the right moment and do something completely unexpected. It’s anyone’s guess what it will be. If I had to take my crystal ball out, they might take one of the small disputed islands in and around the Taiwan Strait. They will not invade Taiwan right now. They don’t need to because, basically, they could just wait it out. They will wait to see what happens in America’s midterm elections. And if there is a Republican sweep, as we all hope, and China fears that a strong GOP president will emerge after whoever replaces Biden, I think we can safely assume that China will make a move on Taiwan. But it won’t be now.

This interview has been edited for length and clarity.