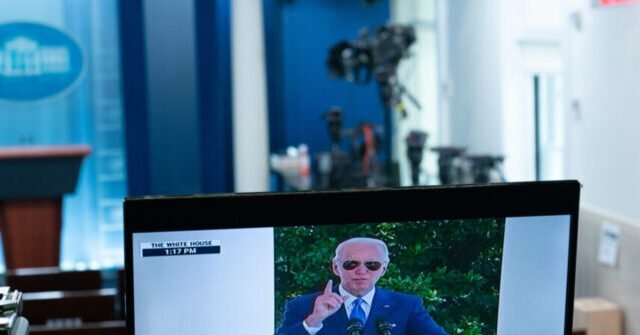 US employers added jobs at a breakneck pace in July — which could spell trouble going forward.

The Labor Department said the U.S. economy added 528,000 jobs in July, well above the 258,000 expected and showing that the labor market is not cooling after three rounds of rate hikes by the Federal Reserve.

It is clearly good news that so many Americans have found work. The unemployment rate fell to 3.5%, matching the Trump economy’s pre-pandemic low. Without rounding the unemployment rate was 3.458 percent, which makes it the lowest rate since the 1970s.

In a low-inflation environment with a growing economy, such as we enjoyed under President Joe Biden’s predecessor, this would undoubtedly be good news. In the Biden economy, wracked by four-decade high inflation and a shrinking economy, there is much to worry about.

The jump in payrolls was accompanied by a large increase in average hourly earnings. More workers and higher wages create more demand in the economy. In the short term, this is likely to push core inflation higher, especially in the services sector. When the Labor Department releases its July Consumer Price Index next week, it is likely to show that headline inflation eased due to falling gas prices, but core inflation will likely still rise. Economists see this as particularly worrying because core inflation—inflation minus food and fuel—is the main indicator of future inflation. Thus, the increase in core prices means that inflation will remain higher for longer.

Massive hiring is also an indicator of inflationary forces. Businesses hire when they are overwhelmed by demand, and 528,000 jobs suggests a tidal wave of demand. The services sector added 402,000 jobs in July, including nearly 100,000 in leisure and hospitality. Education and health services added 122,000, the most ever, in addition to the hiring spree that reopened in May through July. Businesses that see enough demand to bring on many workers will raise prices—especially as their labor and material costs rise.

No wonder the market is convinced that the Federal Reserve should keep its foot on the interest rate accelerator until the September meeting. There are even whispers of the possibility of an emergency meeting if the CPI number is too hot next week, although it seems unlikely that we will have inflation data high enough to call for it.

Falling productivity combined with rising wages means labor costs are rising. In the first quarter, unit labor costs—the dollars spent on labor to produce one unit of output—jumped 12.6 percent. They are expected to increase by 10% in the second quarter. July’s wage gains and the decline in labor productivity we expect will likely push up labor costs more.

Not long ago, people were talking about Goldilocks Economy. The idea was that the economy was just right, neither too hot nor too cold, like when Goldilooks finds the bear’s porridge. Today’s jobs numbers suggest we may be experiencing an economy at the other end of the story, when Goldilocks wakes up surrounded by the three bears and has to jump out the window to escape into the dark forest, never to be heard from again.