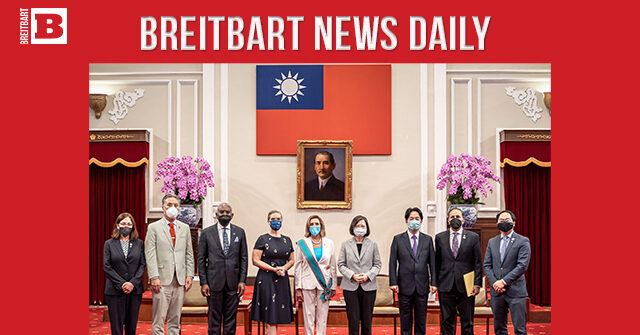 Jerome Hudson, filling in for host Alex Marlow, begins with the news that Arizona Democratic Sen. Kyrsten Sinema has resigned. He worked with Senator Joe Manchin (D-WV) and Senate Majority Leader Chuck Schumer (D-NY) to help Joe Biden pass a 9-figure Build Back Better-lite called the Lower Inflation Act , which reportedly won’t reduce inflation and may make it worse. Speaking of inflation, food lines in America are getting longer under Biden as pet owners abandon their furry friends at alarming rates because the cost of feeding them is high. Then, Biden finishes another week as virtual president and has tested positive for COVID again. In addition, FBI director Chris Wray warns of possible terrorism attacks from Afghanistan. After all, WNBA Star Brittney Griner was sentenced to nine years in prison in Russia on drug charges, and Florida Gov. Ron DeSandis has ousted a state’s attorney backed by George Soros. Our guest today is John Hayward, Breitbart’s deputy editor for international news. John reveals House Speaker Nancy Pelosi’s visit to Taiwan and China’s attention-seeking response to it. It also highlights the potential risk of a Chinese food company that has bought 300 acres of land in North Dakota, just 20 minutes from Grand Forks Air Force Base.

SIGN UP for free by clicking on your preferred podcast platform below.