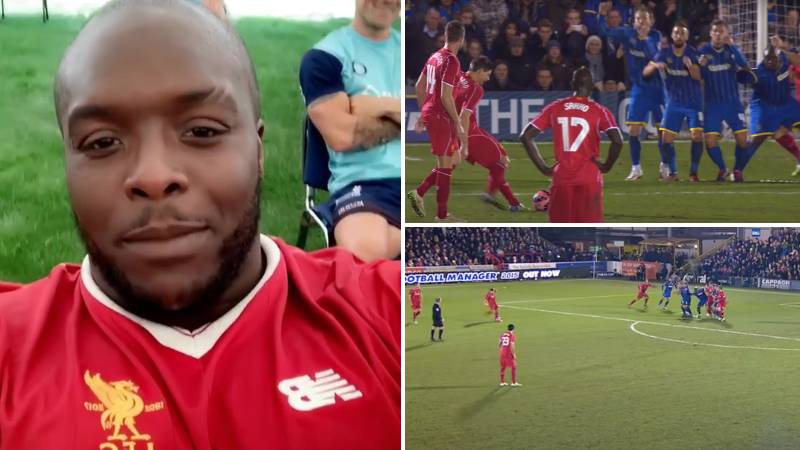 Akinfenwa, who was told he was too old to play football, even called out Sergio Ramos for injuring Mo Salah in the 2018 Champions League final.

Back in 2015, Akinfenwa had a dream to look forward to when AFC Wimbledon drew Liverpool in the third round of the FA Cup.

The Dons had beaten York City and Wycombe in the previous two rounds to set up the huge clash at Plow Lane.

Gerrard opened the scoring after 12 minutes with a header, but Akinfenua equalized in the 36th minute and terrorized his team-mates in some superb displays.

Wimbledon had a strong performance, but in the end it was a moment of pure quality from Gerrard that made the difference – and he said to Akinfenwa, ‘Sorry big’ just before he produced it.

Talking about William Hill’s Stripped podcast, Akinfenwa said: “People ask who is the best player I have played with. It’s Stevie G. And not just because he’s my idol, but because, 20 minutes into that game [AFC Wimbledon 1-2 Liverpool]it looked like he had just decided, “I’m bored now, let’s go score.”

“He picked up the ball midway, put it out, got into the box and headed it in. So it was.

“Later on Stevie got a foul, and as I was going past him, as he was putting the ball down, he goes, ‘sorry bro.’ I look at him anyway. He puts the ball down and bends it over the wall. The second goal of the game, they win 2-1, and I miss the chance to come back to Anfield.”

Gerrard also cleared one off the line in the play before the set-piece, which he just knew was going to score.

Akinfenwa denied his dream of playing at Anfield, but as a sweetener he received Gerrard’s shirt – doing his best to pre-arrange it through his former team-mate Joe Allen.

However, he was so desperate to get it that he even threatened his Wimbledon colleagues if they got in his way.

He continued: “I told everyone I would take Gerrard’s shirt. I loved my teammates at Wimbledon but I threatened them. I won’t sugarcoat it. I said, “if any of you ask for Stevie G’s shirt, there’s going to be trouble.” I played with Joe Allen at Swansea, who was at Liverpool at the time, so I called him and arranged it beforehand.

“I said, ‘tell Stevie the big guy wants his shirt.’ And he texted me saying, “Stevie says he has you.” I told the Wimbledon boys that it will be a straight misunderstanding if you take his shirt away. But Stevie was a man of his word and we hugged afterwards, and then I showed the world that he gave it to me.”