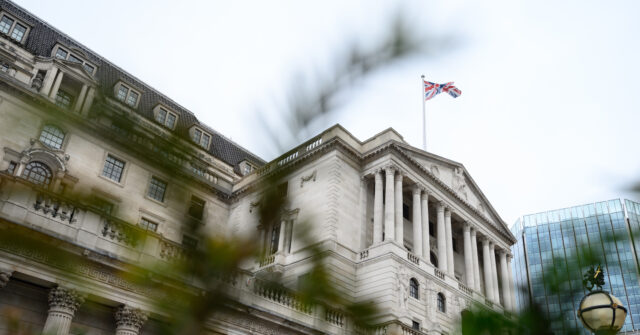 The Bank of England has warned that the British economy is headed for a prolonged recession as it raised interest rates to fight inflation amid fears of inflation of 13 or 15% by the end of the year.

The Bank of England raised interest rates to 1.75% on Thursday, the highest level since the financial crisis of 2008. The central bank raised rates in hopes of dampening expected increases in inflation, which it now forecasts will reach 13.3% this year, a four-decade high.

It is now expected that at the end of the year, the UK economy will be plunged into a recession lasting at least five quarters, with a recession defined as two consecutive quarters of negative growth.

Not only will the recession leave the economy smaller than before China’s coronavirus crisis, the Bank warned, with 900,000 fewer people in work by 2025, the economic crisis is expected to have a drastic effect on wages.

Real household incomes are projected to fall by the most since records began in 1963, falling 1.5 percent this year and 2.25 percent in 2023.

Announcing the rate hike, Bank of England Governor Andrew Bailey he said: “I recognize the significant impact this will have and how difficult the cost of living challenge will continue to be for households. Inflation hits the less well off the hardest.

“If we don’t get inflation on target, it’s going to get worse.”

Real wages saw their biggest fall on record in Britain when adjusted for inflation, the Office for National Statistics revealed on Tuesday. https://t.co/bMOXqS8QaM

However, the central bank said it did not expect inflation to return to its 2% target until 2025.

Commenting on the Bank’s performance, Brexit leader Nigel Farage he said: “The Bank of England has let us down completely. They didn’t see high inflation coming. Then we were told it was “transient”. Now they say it is here to stay for years and will hit 13%.

“They are so bad they make politicians look good!”

While the Bank of England has predicted inflation will hit 13.3%, others, including the Resolution Foundation, have warned it will rise higher, with the think tank arguing it could hit 15% early next year .

Inflation started in earnest last summer after the lockdown was lifted, however, the ongoing inflation is mainly due to the spiraling energy crisis. Analysts are now warning that energy bills in Britain could rise to £4,200 in January after another increase in the energy cap, a socialist system in the UK that is supposed to keep energy prices low for middle and lower class families.

Jack Leslie, senior economic analyst at the Resolution Foundation, said: “The outlook for inflation is extremely uncertain, mainly due to unpredictable gas prices, but the changes in recent months suggest that the Bank of England is likely to forecast higher and later peak for inflation — potentially as high as 15 percent in early 2023.”

One in five households have “negative disposable income” in Britainhttps://t.co/NAb6oyZc9N