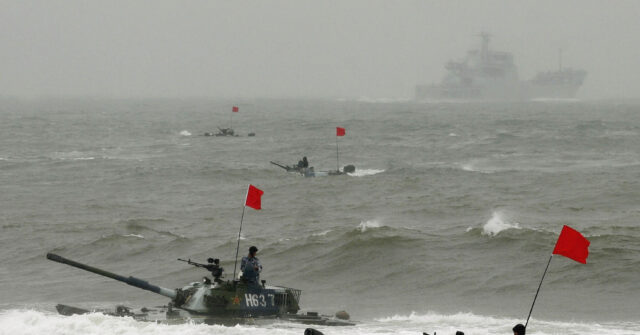 In their last public discussion on Sky News, in which Truss and Sunak did not actually go head-to-head but faced questions from the studio audience and host Kay Burley one after the other, the Tory leadership hopefuls looked at how they would deal with issues surrounding Taiwan and Saudi Arabia. respectively.

Burley grilled Foreign and Commonwealth Secretary Truss over her claims that Britain should have armed the Ukrainians earlier, asking if “we have to arm Taiwan now” as communist China, which claims the island, carries out offensives “exercises” with live fire outside. coasts.

The foreign secretary tried to dodge the question by answering in vague terms, citing the fact that Britain already has a “very secure, very secure control system … and we are licensing exports to Taiwan at the moment, exports provided by the private sector.”

Pressed on whether “we should arm Taiwan or not,” he again dodged the question, reiterating that authorities already authorize exports — apparently not the same thing as arming the island nation as was done in Ukraine — but ultimately determined whether saying that the status quo was as far as a Truss administration would go, to which he replied: “Yes, that’s as far as we’ll go at this stage.”

Truss was also asked if, as Prime Minister, she would follow the example of Nancy Pelosi, the elderly Speaker of the House of Representatives in the United States, by visiting Taiwan, to which she quickly replied that it was British policy that Prime Ministers, Defense Secretaries and Ministers Foreigners don’t travel there — for fear of angering Beijing — and that wouldn’t change that.

Separately, he appeared to lie about ever saying he supported Britons traveling to Ukraine to fight, claiming he had always said people should follow official advice not to travel to Ukraine and that he was simply supporting the Ukrainian cause.

Sunak, meanwhile, who has previously been targeted by the Truss campaign for his apparent weakness in China — Communist Party mouthpiece The Global Times after going so far as to actually back him to become Prime Minister on the grounds that he was “the only candidate with a realistic view of developing balanced ties with China” — he was not dealt with Taiwan, but stuck on how he would approach relations with Saudi Arabia.

Burley asked the former Treasury secretary if he would follow US President Joe Biden in offering a punch to the Saudi crown prince – controversial given his alleged role in the brutal killing of journalist Jamal Khashoggi and the Islamic kingdom’s habit of executing people. for “crimes” such as witchcraft and sorcery by such pre-medieval methods as stoning and public beheading.

Sunak tried to dodge the question by joking that he wasn’t “a fist-pumping type of person,” but pressed on whether he would shake the Saudi crown prince’s hand, he stammered: “I mean, uh, yeah, I’m going to shake his hand? I think, I generally share, I think you have to deal with people all over the world. I don’t think, uh, and we, and they’re a country that we have a relationship with” — rather undermining the tough talk earlier in the interview about the issue of his personal toughness and that of Russian leader Vladimir Putin.

The Khashoggi rage is over! Biden Chami with the Saudi crown prince pic.twitter.com/D2HvpM5jcc