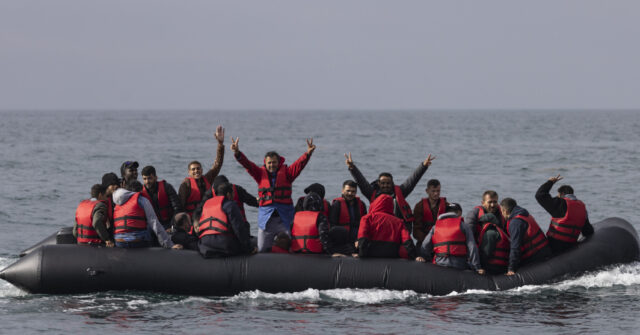 Conservative elder statesman Ann Widdecombe proposed a radical common sense approach to curbing illegal immigration to Britain – namely detaining asylum seekers while their claims are verified rather than letting them roam wherever they please.

“It’s not a matter of welcoming or not, our problem is that we’re just not taking any realistic action to stop them coming in the numbers they’re coming,” said Ann Widdecombe, a minister in the John Major-era government who defected in the Brexit party and was elected to the European Parliament in the last EU elections in which Britain participated.

“The idea of ​​saying we’re going to work with France, we’ve been working with France for years, they’re not working with us, we’ve paid them huge sums of money that they haven’t delivered,” he said. he said GB News.

However, this is not strictly true, as while British government ministers have occasionally complained that the French have failed to stop migrants using their country as a launch pad to cross into Britain, the French and British coastguards regularly work together. The problem is in these multiple known cases of close cooperation, they are working to facilitate the entry of migrants into British waters, not to prevent it.

With Australia-style plans to transfer migrants to a third safe country, Rwanda, was stopped by an anonymous judge at the European Court of Rights — which Widdecombe believes the UK should leave — and the Border Force seemingly unwilling to cooperate with pushbacks at sea, no matter what the government says, the political elder statesman said relying on the French to solve the Channel crisis for Britain after another taxpayer cash giveaway isn’t going to cut it.

“There is no salvation in cooperation with France,” he insisted.

“I think we need to implement the policy that I advocated 20 years ago, which is that you automatically keep all new asylum seekers in safe housing so that we know where they are while we look at their cases individually, and because we know where they are, we can return them those who do not meet the conditions for asylum”.

It is a surprise to Britons that, after they show up in Britain, often after arriving by illegal means, asylum seekers are not detained long-term while their asylum claims are checked — and efforts are made to determine their identity and the likely status threat to the British public.

Instead, they are generally taken to taxpayer-funded accommodation—often hotels—and released into the community. This is despite some turning out to be criminals previously deported from Britain and hundreds simply disappearing in recent months.

Widdecombe noted that such people are being helped by Britain’s “thriving underground economy” and the abuse of the fact that Britain has decided to keep itself out of a society as free as possible by not having national identity cards, which the more European nations. These factors, Widdecombe said, make the country “one of the easiest places to disappear into.”