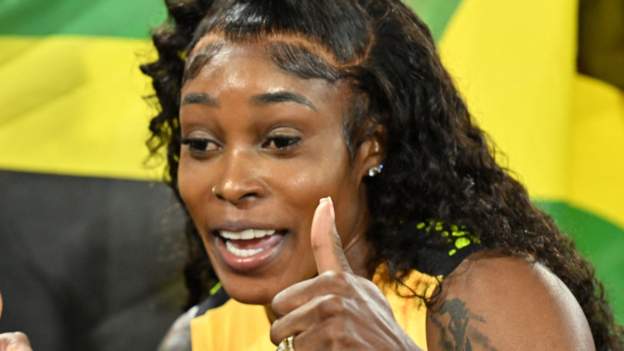 Jamaica’s Elaine Thompson-Herah completed her Olympic sprint double as she took gold in the Commonwealth 200m.

Her winning time of 20.02 seconds is a new Games record, beating the 22.09 seconds set by Shaunae Miller-Uibo.

England’s Zharnel Hughes had to settle for silver behind Trinidad and Tobago’s Jereem Richards in the men’s race.

Just like at Gold Coast 2018, the pair stood out from the rest to claim gold.

In that case, Hughes was initially ruled to have a photo finish before being disqualified for impeding Richards in the adjacent lane.

Pulling into lanes four and seven respectively, there was clear track between the two at the start this time.

Unfortunately for Hughes there was a clear path between them and the finish line.

However, Hughes was pleased with silver in 20.12 seconds, the fastest he has gone since finishing fifth at the 2015 World Championships in Beijing.

“I loved it. You saw the celebration at the end of it,” he told BBC Sport.

“To walk away with a medal, I’m very happy with that. Next to the Euros.”

Thompson-Herah passes through the no-power field

Thompson-Herah’s victory came hours after her compatriots Shelly-Ann Fraser-Pryce and Shericka Jackson, world champions in the 100m and 200m respectively, had landed impressive victories a thousand miles east at a Diamond League event in Poland.

Their absence, along with other high-profile stars such as Kenya’s Faith Kipyegon, has hurt this edition of the Commonwealth Games and the lack of danger of an unassailable final.

Namibia’s Christine Mboma is one athlete who could make it more of a spectacle.

But the 19-year-old silver medalist was hampered by a thigh injury and the storming finish that put her on the Tokyo podium never came.

England’s Adam Hague and Harry Koppel were forced to wait for the start of the pole vault final with their equipment stuck in traffic in Birmingham.

But both made the podium behind Australia’s Kurtis Marschall, with Hague clearing 5.55m and Koppel having a best of 5.50m.