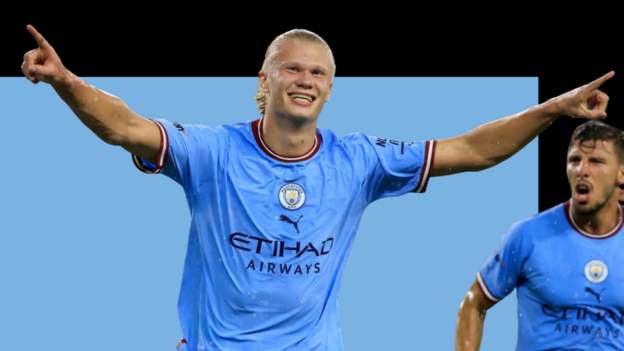 Erling Haaland will make his Premier League debut this weekend – and one goalscoring great has been interviewed by another, with Alan Shearer speaking to the 22-year-old Norwegian striker for Football Focus.

Haaland talks about understanding the “English banter” after being born in Leeds, where his father Alf Inge played before ending his top-flight career at Manchester City.

The former Borussia Dortmund forward is now following in his father’s footsteps, having joined City this summerand tells the Premier League’s all-time leading scorer that he is trying to be better than his dad.

The young superstar also mentions that his father scolds him for his own Miss Community Shield last week, what he believes is the ‘worst feeling ever’ and whether it is the final piece in the puzzle for City.

You spoke to [former Dortmund team-mates] Jude Bellingham and Jadon Sancho to play in England?

We talked a little bit about that. We are a bit alike. My father spent 10 years in England so he brought me up to have a bit of an English sense of humour, so it’s really important not to take yourself too seriously and try to have fun with each other.

Will fitness be a test for you in the Premier League?

It’s a really natural league, the pace is amazing, it’s something I like. It will definitely be tougher, but I feel like I’m ready, my body is ready. A good duel is always nice.

It’s good to hurt a little now and then.

Haaland on the art of scoring and motivation

Is there anything better than scoring goals?

No, I don’t think there is because it doesn’t matter [what type of] goals, when you score, it’s something inside you.

Have you always had this feeling?

Yes. When I was younger I scored as many as I could and it’s still that feeling. When you celebrate your first goal, you want to do it again. I feel it often. If you see someone score a hat-trick, you think, “It would be nice to do that next week.” That feeling, I can’t describe it – you know what I’m talking about, but a lot of people don’t.

Do you spend hours working on your finish after your workout?

I always shot a lot. Scoring goals is the most fun thing about it. When I got to the [Norwegian club] Molde, with [manager] Ole Gunnar Solskjaer, he was talking about my title and he told me, “You can’t even head it”. I agreed with him. Then every day we did crosses and headers.

It’s important to do a few things every day. It doesn’t have to be 500 shots, just a couple, to get it. In the end it is to shoot where the goalkeeper is not standing and hit the target. But also getting those pieces where you just know what to do – when you’re here, shoot there.

When I missed chances, I couldn’t wait to start the next game so I could fix it. Is that how you feel, especially after losing one to Liverpool in the Community Shield?

When I look back, it’s like, “How can you lose from there?” You know it will probably happen to you again. I never sleep well after games. But it’s also motivation to score or do something in the next game after that. But of course, it’s not a good feeling – it’s the worst feeling ever.

Does your dad tell you after games if you haven’t done so well?

After the Community Shield he sent me a message saying, “Why didn’t you just score?” Before I played against Liverpool at Anfield for Salzburg he said, “For your information, I have scored at Anfield before, so I have more goals at Anfield than you.”

Where does your motivation come from?

When I was little he was getting better than my father and I was getting as good as I could. Now there is something in me that is constantly thinking about football, what can I do better. I don’t know where it comes from but it’s there.

Haaland on his personal goals and playing with a smile

Is a goal a game achievable in the Premier League?

I can’t talk much about it. I have to let others speak. I must try to settle and deliver as quickly as possible.

Do you feel pressure or can you just go out and play your football?

Of course there’s pressure – I’m playing for the champions – but in my mind it’s just trying to go on the pitch, smile as much as I can and try to enjoy the game, because life goes by fast and suddenly your career is over.

What will be a successful season for you and your team?

We have to be better in the Champions League and the cups and keep up [our form] all time in the Premier League. It’s not easy, there are so many good teams. It’s about building on what City have had here for many years. I want to bring my own stuff and hopefully be better.

Do you think you are the last piece in the puzzle to take City to the Champions League?

I don’t want to say much about it. It’s my favorite competition – I love the anthem and everything. It’s a very nice competition, a tough competition. My dream is to win it.