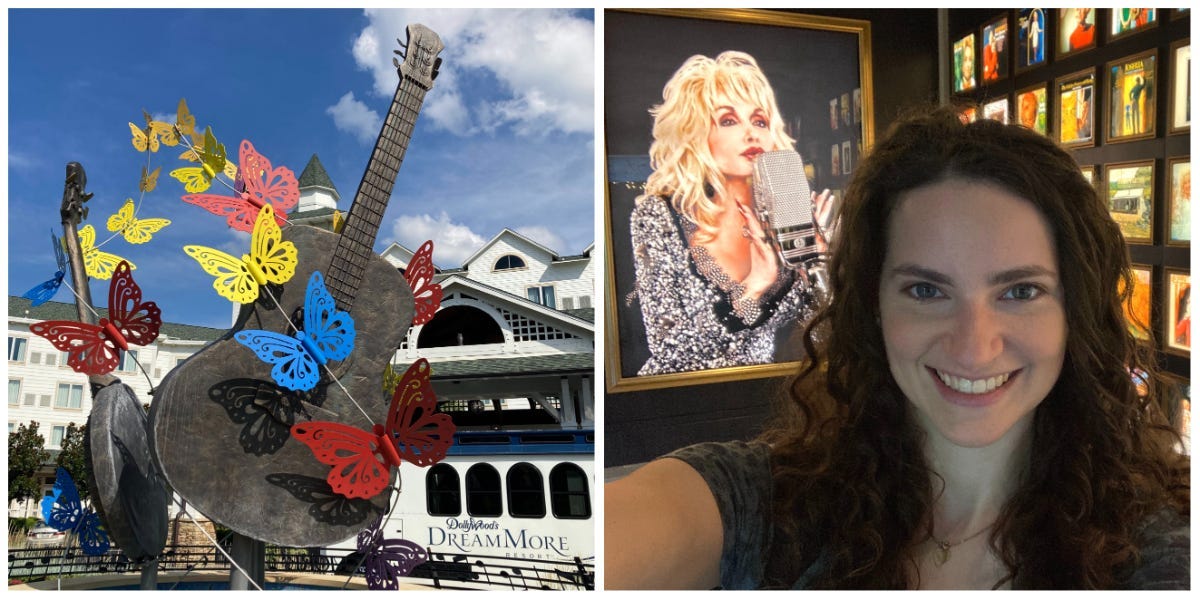 On a recent trip to Tennessee, I stayed at Dollywood’s DreamMore Resort, Dolly Parton’s 20-acre hotel in Pigeon Forge, Tennessee.

My hotel room with a queen bed is $449 per night, excluding taxes and fees. I also added a one-day Dollywood theme park ticket to my reservation for $95.

One of the biggest perks of staying at the DreamMore Resort was the transportation to and from Dollywood.

When I arrived at DreamMore Resort, my Dollywood ticket was waiting for me at the front desk. Since I booked my park entry through the hotel, I also had free access to the hotel’s Dollywood shuttle and a free TimeSaver pass to skip the long lines.

The bus dropped me off right at the park entrance and the driver gave some helpful tips along the way, like the fact that we could get free ice water at any concession stand.

After the fireworks and drone show that closes the summer nights at Dollywood, the bus picked me up at the same convenient spot. I was exhausted after being on my feet all day and I loved that I didn’t have to make the long trip back to the parking lot.

In the lobby, I was greeted with live music as I checked in.

The walls were decorated with framed instruments that Parton used throughout her career.

In keeping with Parton’s iconic style, the instruments were bedazzled with rhinestones and embellished with butterflies.

A sign at the entrance advertised “Camp DW,” a series of family-friendly activities including s’mores baking and bedtime stories.

Also on the agenda: craft kits and free pink lemonade.

At the Starbucks in the lobby, the famous Dollywood cinnamon bun was available without the long lines at the theme park.

Baked fresh daily, the pull-apart cinnamon loaves are soaked in butter and cinnamon-sugar before baking. Each comes with buttercream frosting and apple butter sauces.

It’s such an iconic treat that Dollywood gift shops even sell T-shirts that say “I’m only here for the cinnamon bun.”

In Dollywood, cinnamon buns are sold at The Grist Mill in Craftman’s Valley and Spotlight Bakery on Showstreet, but the wait can be long. Lines at the DreamMore Resort Starbucks are much shorter.

The lobby gift shop sold some of the same souvenirs available at Dollywood in another opportunity to bypass the crowds.

Among the gift shop’s offerings were mugs with Parton quotes and T-shirts with her face on them.

Tucked away in a corner of the lower lobby level, an unreleased Dolly Parton song written as her last was hidden in plain sight.

A chestnut “Dream Box” displayed in a glass case contains a recording of “My Place In History,” a song Parton wrote for release on her 100th birthday in 2046.

Parton wrote “My Place In History” in 2015, the year DreamMore Resort opened. He recorded the song on a CD and included a CD player in the chestnut box as well.

The glass case also features a piece of wood from the front porch of Parton’s childhood home in Sevierville, Tennessee, where she grew up singing with her 11 siblings.

In the corner, a hallway lined with Parton’s album covers paid tribute to the hotel’s founder.

Parton was released almost 90 albums since the beginning of her music career in the 1960s.

As I made my way to my room, Parton’s words and images lingered throughout the hallways.

On the walls outside the elevators were Parton quotes such as “If you want the rainbow, you have to put up with the rain,” “Leave something good every day” and “My weaknesses have always been food and men, in that order.” .

A postcard with a picture of Parton sat on the desk, in addition to the room service menu and a notebook and pen.

The desk also had a small coffee maker.

As I sat drinking pink lemonade in a rocking chair on the hotel porch, I felt like I was living in a Dolly Parton song.

After my charming stay in a Dolly Parton-themed RV the night before, I enjoyed the creature comforts of DreamMore Resort. The idyllic mountain scenery, southern hospitality, and family-friendly entertainment felt true to Parton’s brand, and I loved finding little tributes to her music career throughout the hotel. Plus, the convenience of the hotel’s shuttle service and free TimeSaver tickets made visiting Dollywood a breeze.