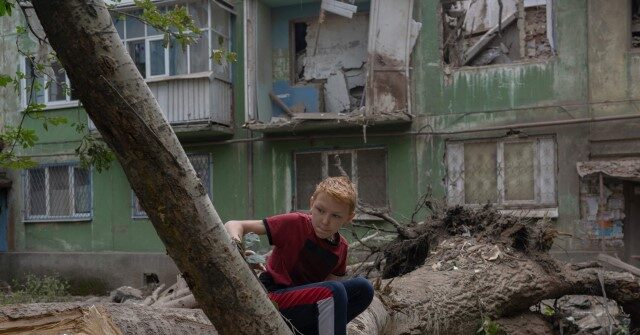 ROME — Ukraine is crying and bleeding because of its “unequal battle with the Russian conqueror,” Ukrainian Major Archbishop Sviatoslav Shevchuk said in a video Friday.

The Ukrainian people are “defending their homeland in the context of this great, unjust, senseless and sacrilegious war.” he said Shevchuk, the head of the Ukrainian Greek Catholic Church.

In his message, the archbishop recounted the recent suffering of his people, including heavy shelling in the cities of Kharkiv, Mykolaiv and Zaporizhia between Thursday and Friday.

“The enemy launched a major rocket attack on the town of Toretsk in the Donetsk region and hit a bus stop where civilians were waiting for transport. Many people died and were injured,” Shevchuk said.

“The Orthodox church was damaged and the priest was seriously injured. This sacrilege really goes beyond common sense,” he added.

Despite the outrages committed against it, Ukraine is “learning to overcome and with the power of God defend its right to exist, its right to freedom,” he said, noting that various international institutions have declared that “the invaders are losing the strategy initiative”.

“And the Ukrainians are successfully defending their land. And therefore, today we say: Ukraine stands! Ukraine is fighting! Ukraine is praying!” he said.

The archbishop also offered a word of thanks and recognition to the emergency service workers of Ukraine who tirelessly carry out rescue missions.

“We see our towns and villages burning every day. And our firefighters tirelessly put out those fires,” he said. “We see how the enemy systematically destroys the infrastructure of the big cities, launches rocket attacks on the cities, the civilian population.”

“And our rescuers are relentlessly dismantling the ruins and from under the debris they take out and rescue the people who were there,” he added.

“Today, on behalf of our entire Church, I want to say to the firefighters, paramedics, rescue workers and utility workers of various types: Thank you so much!” Shevchuk said. “Thank you for your heroic service, even at the cost of your own life, so that towns and villages are not left without electricity and natural gas.”

“Thank you for rushing to help and being the first hand of help from God and Ukraine, which is extended to those who fell victim to the Russian occupier,” he said.

“May the Lord God bless you and reward you a hundredfold for all the heroic service you are doing for your people and your country,” he said.