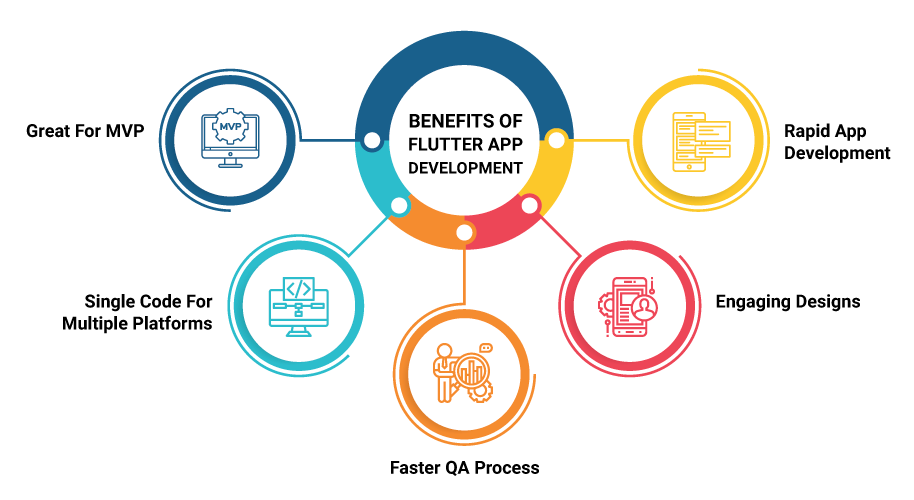 Flutter application development has recently gained immense popularity in the past few years. For those who are not familiar with Flutter, it is an open-source mobile application development framework that was released by Google in the beginning of 2017. Flutter allows its users to design, build and deploy applications on both Android and iOS operating systems, which makes it incredibly popular among developers. Its popularity may also be owed to its accessibility since it’s written mostly in the Dart programming language, which is much less complicated than Java or Objective-C.

Flutter allows developers to create fast and responsive user interfaces. It also provides a high degree of flexibility, allowing businesses to easily update their apps without having to rebuild them from scratch. This can save businesses time and money in the long run. In addition, Flutter’s hot reload feature helps developers quickly iterate on their code, making it easier to experiment and test new features.

User experience is always important, but it’s especially important for businesses. After all, you want your customers to have a positive experience with your product or service. Flutter app development can help improve the user experience in a number of ways.

Getting started is easy

If you’re thinking about developing a Flutter app for your business, you’re in luck. Getting started is easy, and there are plenty of resources available to help you along the way. Plus, Flutter is a cross-platform framework, so you can develop your app for both iOS and Android with a single codebase. And because Flutter apps are compiled ahead of time, they’re fast and responsive, which is essential for providing a great user experience.

No need to code everything from scratch

Flutter is an open source framework created by Google. It allows developers to create native Android and iOS apps with a single codebase. This means that you don’t need to create separate codebases for each platform, which can save a lot of time and effort.

Flutter is a cross-platform framework that allows developers to create native apps for both Android and iOS with a single codebase. This can reduce development time significantly, as there is no need to create separate codebases for each platform.

The hot-reload feature in Flutter allows developers to quickly and easily make changes to their code and see the results in real-time. This feature speeds up the iteration process, so businesses can get their products to market faster.

If you’re looking to develop a cross-platform application, Flutter is a great option. Not only does it provide you with a rich set of Material Design and Cupertino (iOS) widgets, but it also has amazing tools like the Dart DevTools suite. With these tools, you can easily inspect your widget hierarchy, debug your application, and even profile your app’s performance.

Allows you to scale up easily

If your business is starting to take off and you’re finding yourself needing to scale up your team quickly, Flutter can be a great option. With itsHot Reload feature, you can make changes to your code and see them reflected in real time, without having to restart the app. This can save you a lot of time and frustration when trying to make changes on the fly.

The beauty of Flutter is in its simplicity. The framework is designed to be easy to use and extensible, which makes it perfect for businesses that want to create custom applications without a lot of hassle. Plus, since Flutter compiles code down to native ARM and x86 binaries, there’s no need to worry about platform-specific issues. Finally, Flutter’s hot-reload feature allows you to make changes to your code and see them reflected in real time, making app development faster and easier.

No compromise on quality

Flutter is an open source platform that allows developers to create high-quality apps for Android and iOS devices without compromising on quality. Plus, because it’s open source, you can hire flutter developers from anywhere in the world.