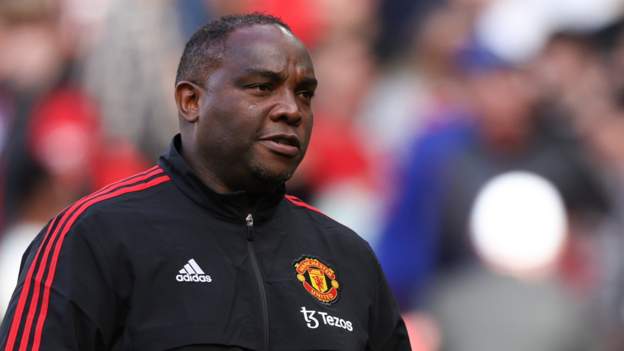 As a boyhood Manchester United fan, Benny McCarthy may not have fulfilled his dream of playing for his beloved club, but he has now managed to secure a job as manager with the 20-time English champions.

The former striker has been recruited by new manager Erik ten Haag to join his first-team coaching staff in a move that has sent South African social media users into a spin.

The 44-year-old’s appointment was hailed as “massive” by McCarthy’s former international teammate Quinton Fortune, who played for United between 1999 and 2006.

“This will be an out-of-this-world experience for Benny,” Fortune told BBC Sport Africa.

“This is so good because it will inspire the kids back home who can see one of their own now being part of the coaching staff at a club as big as Manchester United, who have huge fans in South Africa and around the world.

“It’s a great move by the coach because Benny can speak Dutch, Portuguese and Spanish.”

McCarthy had spells in the Premier League with Blackburn Rovers and West Ham United, scoring 37 goals in 120 appearances between 2006 and 2010, and has since coached in Belgium and coached in his home country.

Ten Haag was on the lookout for another recruit to his backroom staff ahead of his first season with the Red Devils and felt the former Ajax and Porto player had the right credentials for the job.

“There was still one place I wanted to fill, someone with a different voice, and Benny is that,” the Dutchman told MUTV.

“He has experience as a coach. He was a coach at professional level and he was a former striker, a very successful striker as well.”

Initial reports suggested McCarthy had been brought in to work with the team’s forwards, but Ten Haag foresees a bigger role for the South African.

“He will focus on positioning and attacking,” he added.

“I’m not just talking about the strikers, but also the integration from the backs and midfielders. Our way of playing has to be dynamic.”

Experience of winning in Europe

The former Bafana Bafana star scored twice at Old Trafford for Porto in the 2003-04 Champions League knockout stages as the Portuguese club, under Jose Mourinho, won the competition.

McCarthy became the first and only South African to claim a Champions League medal.

“I support Man United and always wanted to play for them,” he once said. “I loved players like Mark Hughes, Andy Cole and Ryan Giggs.”

“The kit guy told me Benny was around. I was surprised and immediately called Benny to ask ‘What’s going on?'” he said.

“He said he got a training session and I’m sure the manager wanted to have a look at him. Ten Haag obviously liked what he saw.”

Fortune, who managed Championship side Reading for just over two years before leaving in February, says McCarthy brings a wide range of experience to United.

“If you look at what Benny has achieved in the game – a Champions League winner, a league winner in Holland and Portugal, a golden boot winner in the 1998 Cup of Nations and in Portugal, along with his coaching credentials, his appointment is no coincidence. “, said the 45-year-old.

Success – and support – in South Africa

Since his appointment, top South African coaches such as Pitso Mosiman and Gavin Hunt, who have won nine Premier Soccer League (PSL) titles between them, have congratulated McCarthy on his new job.

Fortune hopes McCarthy will open doors for other African coaches in Europe.

“It is not only good for Benny but also for African coaches to show what is possible,” he said.

McCarthy, who obtained his Uefa A coaching license badge – the highest in the game, in November 2018 – has enjoyed a highly successful coaching career in South Africa.

After a six-month term assisted by Belgium’s Sint-Truiden with South African Chris O’ Loughlin between September 2015 and April 2016, he was signed by Cape Town City to take over from former Bafana Bafana team-mate Eric Tinkler in June 2017.

During his 18 months with the Citizens, he led the team to a respectable fifth place in the league in his first season and delivered the MTN8 knockout trophy the following with his hometown club.

McCarthy performed even better in his second job in South Africa, taking AmaZulu, a club who had been relegated four times from the PSL, to an unprecedented second-place finish in the league at the end of the 2020-21 season, booking for the first time. place in the African Champions League.

He capped a stellar campaign by winning the PSL Coach of the Season award, but after guiding the team to a place in the competition’s groups, their form on the domestic stage suffered, resulting in his departure from the club in March.