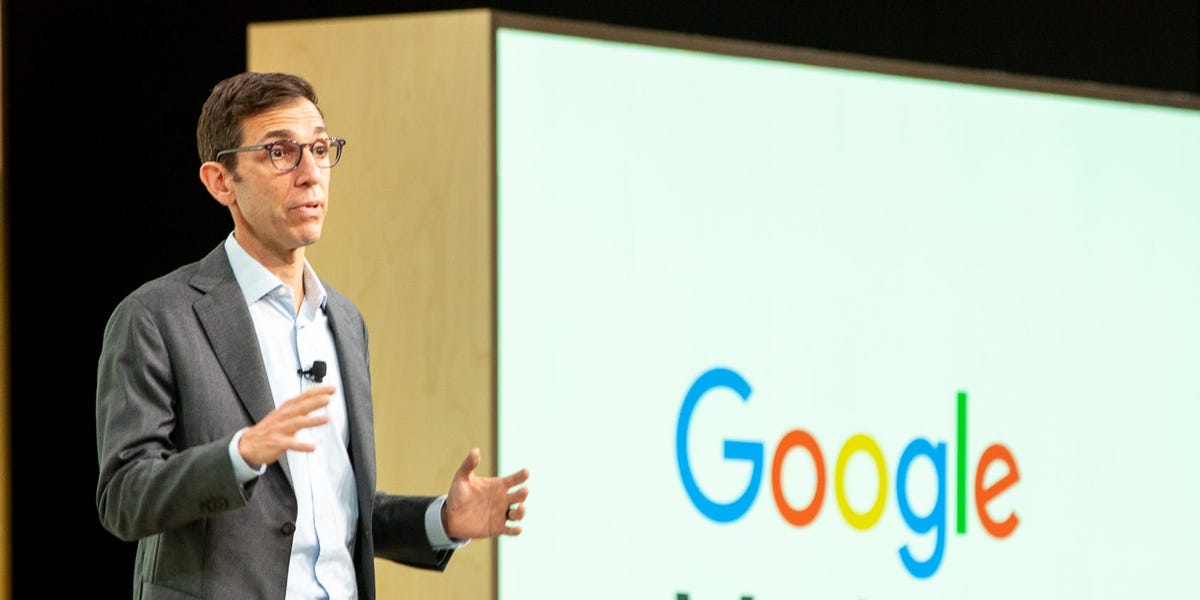 Jerry Dischler, a new MBA at Wharton, began his career at Google in 2005 by giving his manager a list of requirements. Among other things, he wanted to work on something key to Google’s success and something that would emerge.

“And that was before I handed him anything,” Dissler said. “So it was probably a bad decision.”

It was a bold move that could have backfired, but it didn’t. Today, Dischler works on something both mainstream and emerging as one of Google’s top executives in charge of its advertising strategy. Google’s success in advertising has made it the world’s biggest ad seller, but it now faces economic uncertainty and a global push against data-driven advertising. It’s up to him to reinvent digital advertising to keep its $209 billion ad business afloat.

“Long-term advertising, for the next 10 years, is very different than the last 20 years,” Dischler said.

Google’s dominance has made it a target of lawmakers who question its competitive practices. It also faces challenges from consumers and other tech giants, such as Apple, who want to curb the data collection practices that have made online advertising so lucrative.

As a result, Google’s Chrome web browser is phasing out third-party cookies that are critical to ad tracking and measurement, and is restructuring those practices. Dischler oversees thousands of Googlers working on new advertising methods that they hope will satisfy consumers, regulators and the rest of the ad industry. At the same time, he must continue to grow Google’s ad business amid increasingly dismal spending forecasts.

Dischler’s decisions reverberate throughout the industry

Dischler’s first job at Google was building payment servers for what is now known as Google Pay. He moved on to search ads in 2008, and by 2009, he was overseeing the Google team that developed new ad formats.

Over time, he developed a reputation for putting Google’s goals ahead of his own team’s goals.

In 2019, Dischler moved hundreds of people in its search advertising teams to a new team that developed policy and privacy standards, overseen by Igor Perisic.

Dischler was promoted to his current role overseeing Google’s entire ads operation in June 2020 when his boss, Prabhakar Raghavan, who previously ran the ads business, expanded his responsibilities to Search, Maps, Assistant and News.

Since then, one of its biggest decisions came in 2020, after Google’s Chrome team said it would phase out third-party cookies.

The issue of their replacement was a matter of top interest. High-level officials participated, including Raghavan. Philipp Schindler, the head of operations; and Allan Thygesen, who leads Google’s advertising business in the Americas, as well as the global team that works with major advertisers and agencies. The easiest solution would be to create a digital ID that would work similarly to cookies, Thygesen said.

However, these identifiers, which are powered by an individual’s online activity, are problematic as consumers balk at the idea that their information could be used as currency.

Ultimately, Dischler decided to rebuild Google’s advertising technology without relying on identifiers. So the Chrome team introduced the Privacy Sandbox, a forum where it and the rest of the ad industry could come up with new marketing tactics. However, while both Google Chrome and ad groups participated in the Sandbox, they operated independently of each other.

And early returns they weren’t great. Google rejected an early proposal, FLoC, after tests showed it was difficult for advertisers to use and it didn’t work as well as cookies.

Google’s replacement for FLoC, called the Topics API, has drawn backlash from some publishers who worry it will allow adtech middlemen to come between them and their audience.

In July, with the Privacy Sandbox proposals struggling to gain traction, Google pushed back the deadline to phase out cookies for a second time, from late 2023 to the second half of 2024.

“Google is protecting itself,” said Jeff Green, CEO of adtech firm The Trade Desk and one of the staunchest critics of Dischler’s cookie decisions. wrote in 2021. “That’s okay, and to be expected. They have one of the largest and arguably most sensitive pools of personally identifiable information (PII) on the Internet within its four walls, so it’s smart to project itself as privacy-focused.”

Google executives who spoke to Insider insisted that the company wants to do right by consumers and advertisers.

It’s not an ad. It is an automated business results machine.

Dischler is leading another big bet at Google, Performance Max, to bring automation to advertisers’ campaigns. He started pushing this idea five years ago, anticipating that the data used to target and measure ads would disappear and that advertisers would need machines to do the work.

“Our big customers had learned how to use all those knobs and controls,” Thygesen said. “Jerry was one of the first to see that in order to get to the next level, we really need to provide automated solutions that optimize customers without all those knobs, because the machines can actually do a better job than us or the customers can us”.

Initially, advertisers focused on measuring key results, such as return on ad spend, didn’t see the need for automation. Performance Max also faced internal doubts that it would underperform.

“You had to disrupt existing campaigns and existing ways of what the sales team would take to market and how we would sell our products to customers,” said Vidhya Srinivasan, who oversees search ads at Google and reports to Dischler.

As Dischler’s team began building tools to find clients who were of the greatest value to a business over the long term, advertisers began to buy, said Mike Wojciechowski, senior director of media buying at agency Tinuiti.

One of Performance Max’s biggest tests came during the pandemic.

“When COVID hit and there were all the shocks to the system, I was biting my nails and wondering, ‘Hey, is all this automation going to hold up?’ Dischler said. He added that he did, and that ads using automation performed better during the pandemic than those that didn’t.

Google automation continues to gain ground. During the company’s earnings call in July, Schindler said the number of businesses using Performance Max has increased fivefold since the beginning of the year. And it could allow Google to tap into areas of spending outside of advertising.

“It’s really an automated business results engine, right?” said Darvaux-Garnot. “I put a dollar into Google and I get five dollars in revenue, and it’s fully or 90% automated. We’re starting to talk to advertisers about investing with an open marketing budget, because why limit it?”

Still, like Privacy Sandbox, Performance Max is a work in progress. It should work for large, sophisticated advertisers as well as the smaller advertisers who make up the bulk of Google’s ad revenue, and some large advertisers still want more control and visibility over their marketing campaigns than they get from Performance Max .

Their inability to see exactly how it works also fuels long-standing suspicions that Google is overstating business results for itself.

“Google can certainly optimize its own performance,” said an executive at an advertising firm that represents major advertisers.

Tinuiti’s Wojciechowski, while a fan of Google’s automation, said the company would never put its entire budget into Google’s engine. “We’re always going to have a mix of customers who need to control more than what Google gives to automated campaigns,” he said.

Google is likely to remain a dominant force in advertising, thanks to the huge number of small and medium-sized businesses that rely on it, as well as its position in search and its ownership of YouTube, several people in the ad industry said. Even as some parts of Google’s ad business slow, as YouTube and Google Network ads did last quarter, it’s gaining strength in other areas, such as search.

But as Dischler himself admitted, there’s no guarantee his big bets on overhauling how digital advertising works will pay off.

“It’s hard not to have moments of doubt,” Dischler said. “These problems are hard. I think part of good leadership is understanding what you’re trying to sustain, understanding the scale of the challenges, and then breaking down the problems into small pieces so you can actually make progress and then be honest about what you can and can’t do.”