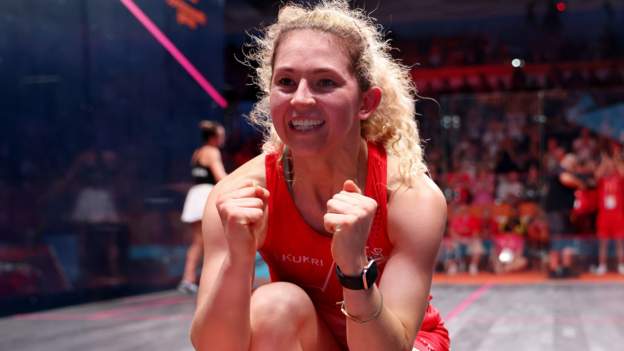 England’s Gina Kennedy won squash gold on her Commonwealth Games debut to cap her meteoric rise in the sport.

Kennedy, a Harvard graduate, rose from a world ranking of 185 to the top 10 in less than a year and reached her highest ranking of eighth in July.

Asked if she can put her victory into words, she said: “I literally can’t.”

He added: “I dreamed about this and now it’s happened, I have no idea what to do with myself.”

Kennedy, who trains at the same Bromley club as tennis star Emma Raducanu, previously said winning Commonwealth gold would be the “ultimate achievement”.

She will be joined on the podium by England team-mate Sarah-Jane Perry, who won bronze in a stunning 3-2 comeback against New Zealand’s Joelle King.

“I’ve had some good comebacks in my time but this is up there with the best of them,” said the 32-year-old, who was beaten by King in the Commonwealth final four years ago.

England team-mate James Willstrop – the defending men’s singles champion – was unable to follow in Perry’s footsteps, however, as he was beaten 3-0 by India’s Saurav Ghosal in the men’s bronze medal match.